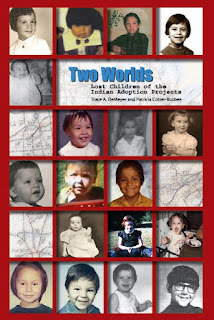 In the final countdown to BAAF National Adoption Week, I stumbled across a story on Twitter reported in the Kent and Sussex Courier about a Native American man adopted into a Western family in the mid 1960s.  The article caught my attention, not only because of my interest in adoption but also because of the fascinating cultural implications of such a tale.  Johnathan Brooks has contributed a chapter to the edited volume Two Worlds: Lost Children of the Adoption Projects, which I have now been able to read.  Johnathan's is just one of several stories detailing the cultural assimilation of Native Americans into a wider American / Europe world, something about which I was previously unaware.
Read the entire review: http://beaconhilltraining.blogspot.com/2012/10/two-worlds-adoption-tale.html