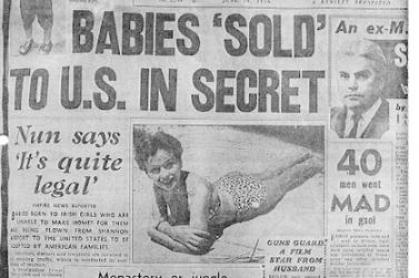 The United States is responsible for most intercountry adoptions in the world: 20,000 out of the total 30,000 total orphans adopted annually. (Remember that these children are not actually orphans.)
In many cases, the prospective adoptive parents (PAPs) are motivated by a sense of altruism, (saving a child), coupled with their desire to overcome infertility and fulfill the Western standard of the nuclear family.

Ignorance is no longer an excuse. Google "Adoption Scandals" - and this pops up:

From Wikipedia, the free encyclopedia

Child laundering is a scheme whereby intercountry adoptions are effected by illegal and fraudulent means. It usually involves the trafficking of children which is usually illegal and may involve the acquisition of children through monetary arrangements, deceit and/or force. The children may then be held in sham orphanages while formal international adoption processes are used to send the children to adoptive parents in another country.
Child laundering rings are often expansive with multiple hierarchies of people motivated by large profits from the black markets of intercountry adoptions. With Westerners willing to spend thousands of dollars to adopt a child, enough monetary incentives are created to extend the laundering ring from the middle classes to societies' more affluent groups. These "baby broker" families subsequently forge a new identity for the laundered child, "validating" the child's legal status as an orphan and ensuring the scheme will not be uncovered.[1]
Child laundering is highly controversial; while many argue that these children are being treated as a commodity and stripped of family contact, others argue that, ultimately, the children will live in a more affluent environment and have more opportunities as a result of this adoption.[2]
*This is available for all the potential adoptive parents (PAPs) to read. If they did do some research, we'd make some progress in ending international unregulated child trafficking.
It's about money, providing a "Product" who is a child.  Remember that.