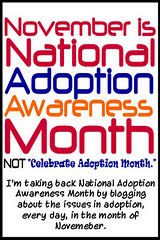 After you read this post at Lost Daughters blog by Rebecca, HERE, I wanted to share a story about what happened to me in Wisconsin in 2008. I was invited to read an excerpt from my memoir at the Wisconsin Book Festival in Madison.

My memoir One Small Sacrifice wasn't done. It was a draft. It had changed almost daily. I knew it had holes in it.

I was having trouble finding and proving the Indian Adoption Project(s) had happened on paper.  I was using internet archives.

I knew I was one voice among thousands of Lost Birds/Split Feathers. THOUSANDS!

This troubling chapter of history (Indian adoption projects run by the governments of Canada and America) and the truth of this intended genocide was buried, hidden.  Even academics had not caught on. Some were writing about residential boarding schools, not adoption.


Well their words echo in me even today...

That happened here in western Massachusetts where I live.  One village over, I meet Daniel, a Lakota adoptee; we met at a ceremony in Wisconsin. Then I met another in the next town, an adoptee from Boston who is Inuit.

If adoption intended to isolate us from other adoptees, from our tribes, from our first families, they did it very successfully. Closed adoption succeeded by isolating us, by silencing us, paralyzing us, alienating us.

There is this silent shame in being adopted, lost to our tribes because of a government plan to erase Indian children from tribal rolls.

I felt such shame, and abandoned. Yet I was afraid to upset my adoptive parents. I was afraid something might be wrong with me. I was afraid to look for answers. I did not have friends helping me process what to do, what was next. I could not afford a private detective.

The inventors of this genocide experiment were successful until my first story about the Indian Adoption Projects ran in Talking Stick in NYC in 2005.  The article "Generation after Generation, We are Coming Home" broke that silence. Then adoptees found me. They broke their silence too.
If I had not met adoptees like me, I would not have been able to finish my memoir.

Two books, their narratives, stories written by Native adoptees soon followed - Two Worlds and Called Home.  These books will reach more adoptees like us. I wish I'd had these books when I was 22 and just starting my search. I had nothing to go on, and very little hope.

At the end of my reading in Wisconsin, a young man came up and said he was adopted too. Painfully shy, he admitted that he was afraid of upsetting his adopted parents if he tried to look for his first family.  He had not even tried because Wisconsin had sealed their adoption files tight as a drum. He was also scared of the expense ($$$) of looking!  I told him I understood and how many of us adoptees suffer from a "gratitude attitude," when we feel silenced and afraid. I told him to start his search when he was ready and I'd help him. I told him to contact me.

I gave him what I knew he needed: HOPE.