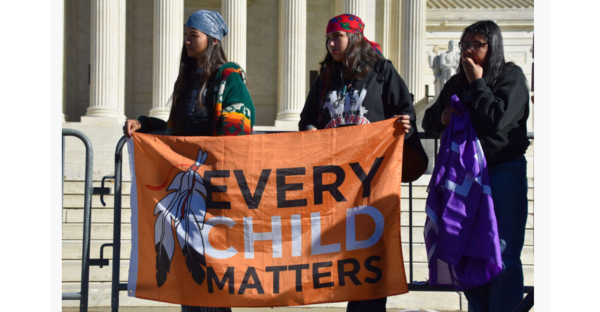 CounterSpin: Those listeners who have heard about Haaland v. Brackeen will know that that Supreme Court case is about considering the Indian Child Welfare Act—which is aimed at keeping Native communities together—to be “race-based,” and therefore unfair and unconstitutional.  Opposing the actual mission of those who want to eliminate the Indian Child Welfare Act is just…reality: the reality that made the Act necessary in the first place, and the reality that will likely ensue if it is repealed.

In the worst-case scenario, Tribal sovereignty and nationhood would be eliminated, with disastrous consequences for Native people.

According to the National Indian Child Welfare Association, ICWA “lessens the trauma of removal by promoting placement with family and community.” Positive and continuing connections to one’s family, community and culture are key factors in ensuring health and well-being.

ICWA is widely supported by Native and non-Native stakeholders: 497 federally recognized tribes and 62 Native organizations, 23 states and D.C., 87 congresspeople, 27 child welfare and adoption organizations, and many others signed on to 21 briefs submitted to the Court in favor of ICWA.

We’ll learn more from Jen Deerinwater, who writes for Truthout, among other outlets, and is founding executive director of Crushing Colonialism.