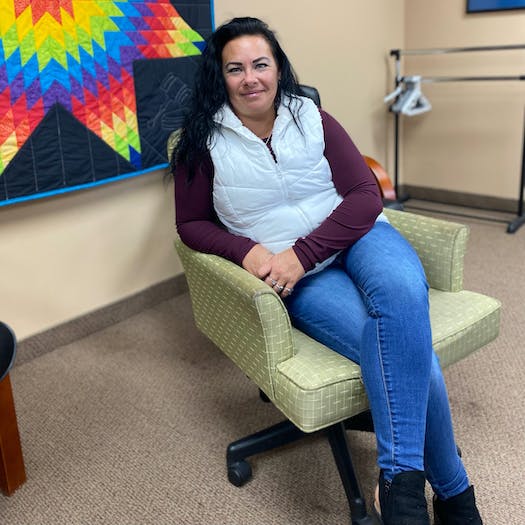 Photo: Jessica Washington/The Fuller Project. Caption: Teresa Nord works as a parent mentor at the ICWA Law Center. Nord, who is a Navajo and Hopi Indian descendant, says she had her daughter removed by child protective services.

Teresa Nord regained custody of her eldest daughter several years ago, but the experience still haunts her.

"I live with this constant fear," says Nord, 42, a Navajo and Hopi Indian descendant who lives in Glencoe, Minn. "I call it child protection PTSD, that they're just gonna one day knock on my door."

In 2015, Nord's then 6-year-old daughter told her she had been abused by one of her mom's close friends. Nord reached out to a social worker for help — only to have her daughter immediately removed by child protective services.

Nord spent three years fighting to regain custody, but her daughter's time in foster care left her with deep abandonment fears and exacerbated other mental health challenges. "The foster provider told her, 'Your mom is a bad mom. You're never going to see her again [and] you might as well get used to that,'" Nord says.

Recent discoveries of mass graves on former indigenous boarding school sites have led to an international reckoning over the atrocities committed by the U.S. and Canadian governments in the name of assimilation. And political leaders like Minnesota Gov. Tim Walz have acknowledged the deep trauma the schools inflicted upon generations of Native families.

However, Native parents and experts in Native child welfare in Minnesota say that many of the underlying beliefs about Native families that fueled the boarding school systems are perpetuated by the state's modern child welfare system, with devastating effects.

Many Native mothers like Nord can't shake the fear of having their children ripped away from them or the ripple effects of generations of Native removals.

"There's a really explicit connection in the indigenous community's mind between boarding schools and the child welfare system," says Nicole Martin Rogers, a White Earth Ojibwe descendant and senior research manager at Wilder Research, a research organization that works with nonprofits and governments. That's because boarding schools are "how the system first started taking kids away from their families," she said.

In the 1800s, the federal government established mandatory boarding schools for Native American children, with the mission of assimilating Native children. The first boarding school in Minnesota opened in 1871. Children in these schools often were starved, beaten and forced to sever their connection to their Native heritage and language.

Although these schools mostly were discontinued by the 1950s, Native children continued to be removed from their homes at staggering rates through adoption.

Native children were removed from their families in Minnesota and other states at such high rates that outrage from Native communities led to the creation of the 1978 Indian Child Welfare Act (ICWA).

ICWA mandates that child welfare agencies give special consideration to cases involving enrollable tribal members in the form of consultation with tribes.

But for Native women like Nord, who is a tribal descendant but not an enrollable member, these protections don't apply.

Social workers and courts often fail to give Native parents adequate and culturally appropriate guidance on how to reunite with their children, a core tenet of ICWA, says Sadie Hart, an ICWA compliance court monitor in Ramsey County. And they often mandate parents to follow impossibly strict deadlines to resolve issues related to poverty or addiction to regain custody, without providing adequate support to do so, she says.

Looking back on the boarding school and adoption eras, it's easy to say they were wrong, says Shannon Smith, executive director of the ICWA Law Center. But she says the underlying mentality persists, as does the impact, often due to factors like cultural ignorance or mistaken beliefs about Native parents.

"I think a lot of times removals [are] society … equating removal with safety. And that is an equation that is just automatic. And I think that's fundamentally flawed," Smith says.

Indeed, some experts say, poverty can often look like neglect to social workers, especially in families of color. Even when poverty is causing instability that puts kids at risk, removal may not be the best option and can exacerbate rather than fix the root issues.

In Hennepin County, where the ICWA Law Center is located, Native Americans account for roughly 26% of those living in poverty, although they make up just 1% of the population, according to the county's 2018 report "Child Protective Services: Reform and Child Well-Being."

"There are so many indigenous families living in poverty," says MartinRogers. "It's hard not to consider it neglect … if the caseworker walks into the house and there's no food in the refrigerator or the kids don't have a bed to sleep on or other things that can result from someone just being really poor." 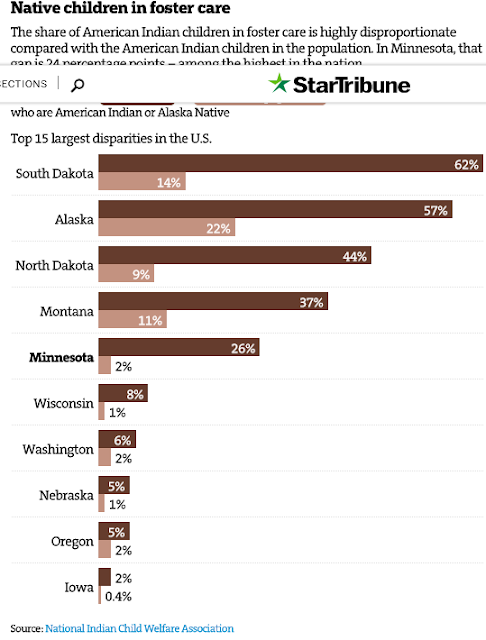