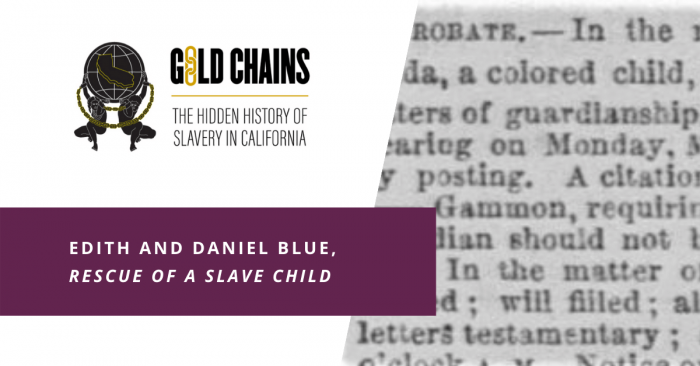 The ACLU of Northern California in collaboration with radio station KQED, the California Historical Society and the Equal Justice Society co-created an educational project directed at highlighting the stories of slavery throughout California.

Gold Chains: The Hidden History of Slavery in California includes 13 essays and six audio stories that present the experiences of African Americans and Native Californians during the 1800s.

Candice Francis, communications director of the ACLU of Northern California said that the project originally spawned from wanting to observe the 400th year since enslaved people were brought to the United States from Africa.

“We were guided to rather than take on that mammoth task, to look more closely at California because there was a hidden history there,” Francis said.

One story highlighted on the website surrounds California’s first governor, a white supremicists named Peter Hardeman Burnett. Burnett advocated for the genocide of Native Americans as well as the exclusion of African Americans and other minority groups in California.

Native children often suffered horrific abuse as a result of a law that professed to send them to white families for self-improvement but instead created a form of legalized child slavery. The case of Rosa, in Mendocino County, is just one example of how the Act for the Government and Protection of Indians brutalized Native, and sometimes black children.
Rosa was between 10 and 12 years old and was believed to be from either the Yuki or Pomo tribe. In the winter of 1862, she was beaten and left to die in a snowstorm by a woman who had been granted legal custody of her under the law. The woman, identified in Mendocino County public records as “Mrs. Bassett,” had locked the child outside in freezing temperatures. Her partially clothed corpse was found in a box outside the woman’s home. Mendocino County authorities never brought charges, even though Bassett’s neighbors testified that she had left Rosa outdoors, causing the child’s death. Before her death, Rosa had been forced to work in the Bassett home as an indentured servant. According to an 1862 report in the Alta California newspaper, kidnappers could sell children for “$30 to $150 depending on their quality.” That same year, a child trafficker came to Ukiah with 16 children, ages six to 13. After he was arrested, the children became public wards. But instead of returning them to their families, county officials offered them to local white residents as “apprentices.” Bassett was among the more than 100 people who applied to become guardians of the children.

Letter from Major John Bidwill of Butte County on how widespread slavery of native people was: “[native people] all amoung us, around us, with us – hardly a farm house – a kitchen without them.”

Report from Indian Affairs Superintendent:
Superintendent of Indian Affairs, George M. Hanson, an ally of Lincoln and opponent of slavery, once found several white men making their way back from Humboldt County with native children in tow. The men said that the children were orphans, and they were providing them with homes and safety. When asked how they knew the children were orphans. The kidnappers replied that they had killed the parents themselves.