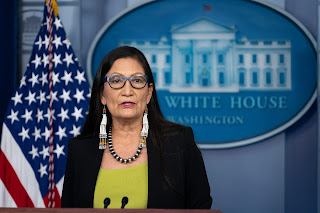 transcript Deb: I'm Secretary Deb Haaland at I'm honored to join you from the ancestral homelands of the Anacostia and Piscataway people on what President Biden has proclaimed as National Missing or Murdered Indigenous Persons Awareness Day. I wish we didn't need to be here. I wish that this day was obsolete, that we didn't have to keep fighting year after year for our people to be honored and respected. But we are here. And I want to use today to shine a light on the national crisis of missing and murdered indigenous peoples and give space to others to share the work they are doing on this issue. Everyone deserves to feel safe in their communities, but the MMIP crisis is one that communities have faced since the dawn of colonization. For too long, this issue has been swept under the rug by our government with a lack of urgency, attention, or funding. The rates of missing persons cases and violence against American Indian, Alaska native, and native Hawaiian communities are disproportionate, alarming, and unacceptable. It is heartbreaking to know that our loved ones are at an increased risk of disappearing without warning, leaving families and communities devastated. I want to extend my gratitude to the organizers, advocates, native women who have been shedding light on MMIP crisis for decades. People who have had an empty chair at their kitchen tables, loved ones who tirelessly searched or their relatives, service providers who hear the heartbreaking stories of family members of the missing. I want you to know that I see you and I stand with you. In our first year, there is much the Biden-Harris administration has done to take this issue seriously. As many of you know, last year, I announce the formation of a new missing and murdered unit within the Bureau of Indian affairs office of Justice services to provide leadership and direction across departmental and interagency work involving missing and murdered American Indians and Alaska natives. The MMU is marshaling resources across agencies and throughout Indian country to focus on this crisis. Since the launch ofMMU, the department has built up personnel and increased infrastructure capacity by launching new offices. Today, 17 BIA offices located throughout the nation have at least one agent dedicated to solving missing and murder cases for American Indians and Alaska natives. In December, the BIA announced on lots of its new website dedicated to solving missing and murder cases in Indian country. The website is bia.gov/mmu. Bia.gov/mmu. The site is an important tool to help law enforcement, families, and communities to share critical information about missing and murdered individuals that can help the MMU solve cases and give closure to families. The website showcases individual missing and murdered case profiles that can be quickly shared via social media and other digital media to raise visibility of victims. It also provides multiple pathways to submit important tips and other case information that may help investigators with detection or investigation of an offense committed in Indian country. The MMU has enabled the Department to expand its collaborative efforts with other agencies such as working to enhance the DOJ's national missing and unidentified persons system. Staff are also developing strategic partnerships with additional stakeholders such as the FBI, behavioral analysis units, FBI forensic laboratories , U.S. marshals missing child unit, and the National Center for missing and exploited children. This unit and interior will continue to engage in collaborative efforts with tribal, federal, and state stakeholders to ensure accurate data and enhance community outreach. The MMU is a critical tool in our work to address this crisis, and today, we announce steps for another. In Congress, the Not Invisible Act now in partnership with the Justice Department and with extensive engagement with tribes and other stakeholders, we are putting that law into action. Today, our agencies announce the membership of the new Not Invisible Act Commission which we formed the last year. For the first time, the interior and Justice Department will be guided by an advisory committee composed of law enforcement, tribal leaders, federal partners, service providers, family members of missing and murdered individuals, and most importantly, survivors. This commission will ensure that we hear the voices of those who are most impacted by this issue. It includes diverse experience, backgrounds, and geographies to provide balance once of use. The commission will hold hearings, take estimate, and -- testimonies, and receive evidence to develop recommendations for the federal government to combat violent crimes against indigenous people. The missing and murdered indigenous peoples crisis is centuries in the making, and it will take a focused effort and time to unravel the many threads that contribute to the alarming rates. I'm grateful to those of you who rang the alarm and gave a voice to the missing. My heart goes out to the families of loved ones who were impacted by violence. We will keep working to address this issue and together, I believe we will provide justice for survivors and families. And that I will turn the floor over to Deputy Attorney General Lisa Monaco, who will share recorded remarks for today's event.