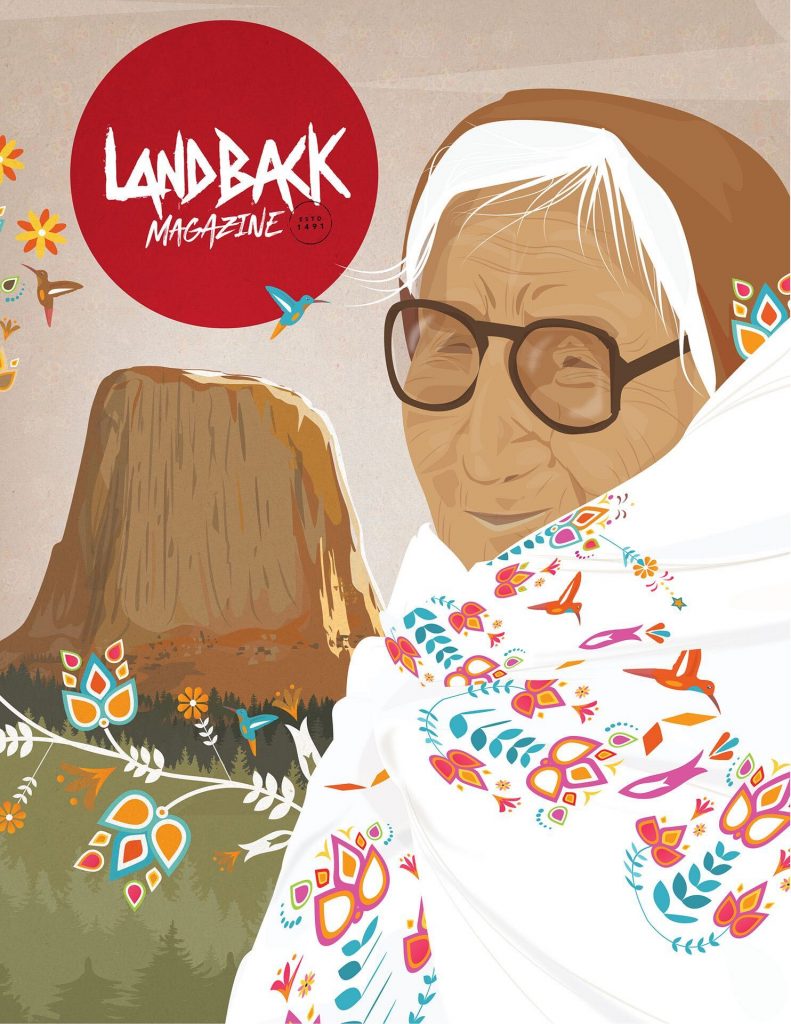 Rapid City, SD – NDN Collective’s LANDBACK Campaign has officially launched pre-sales of the limited edition LANDBACK Magazine, He Sapa: The Heart of Everything That Is, which pivots on the cornerstone work of the LANDBACK Campaign to reignite and continue the ongoing struggle to return the He Sapa (Black Hills) to the Oceti Sakowin (Lakota/ Dakota/Nakota) Nation. LANDBACK organizing has a powerful lineage. Nellie Red Owl (1907-1992) is intentionally featured on the cover as an acknowledgment of that lineage, her courageous actions, and her commitment to reclaiming the He Sapa.

The LANDBACK Magazine contains over 100 pages of content from movement elders, youth organizers, the frontlines of LGBTQ2S+ justice, climate justice, and joint-struggle movements against White Supremacy and colonialism and is intentionally Indigenous-powered project, created in partnership with Indígena, Primate, Red Media Press, and Red Planet Books and Comics.

“The LANDBACK Magazine is a culmination of stories and experiences shared across generations of front line struggles, courageous mass mobilization, and teachings to guide us into the future,” said Nadya Tannous, LANDBACK Campaign Organizer. “We’re bringing old school, punk vibes and a loud voice, connecting local LANDBACK efforts to domestic and international struggles for justice.”

“What started as just a wild idea shared with a few brilliant minds is now a work of art that represents the past, present, and future of LANDBACK as a global movement,” Krystal Two Bulls, LANDBACK Campaign Director. “We focus locally on the He Sapa: The Heart of Everything That Is. My hope is that it activates a whole new generation of organizers to step into the centuries-long mission that our Ancestors sacrificed their lives for. It has always been about our relationship to the land, and it always will be.”

“It is a true honor to be able to compile stories, poems, photos, and interviews with movement elders and young people who call He Sapa home,” said Demetrius Johnson, LANDBACK Campaign Organizer. “The care and love that went into the creation of this magazine can be felt and seen on every single page. The struggle to reclaim He Sapa is ongoing, and the hope is that this magazine supplements this long and powerful history of reclaiming that sacred site.”

The LANDBACK Magazine will hit the shelves of many Indigenous-owned and Movement bookstores in the so-called continental US, so-called Canada, and the Hawaiian Kingdom in November for Native American Heritage Month, including Goodminds, Libélula Books and Co, Birchbark Books, Red Planet Books and Comics, and Native Books Hawai’i. It will also be intentionally distributed to highschools, Tribal Colleges and Universities, University Libraries and to our incarcerated Relatives.