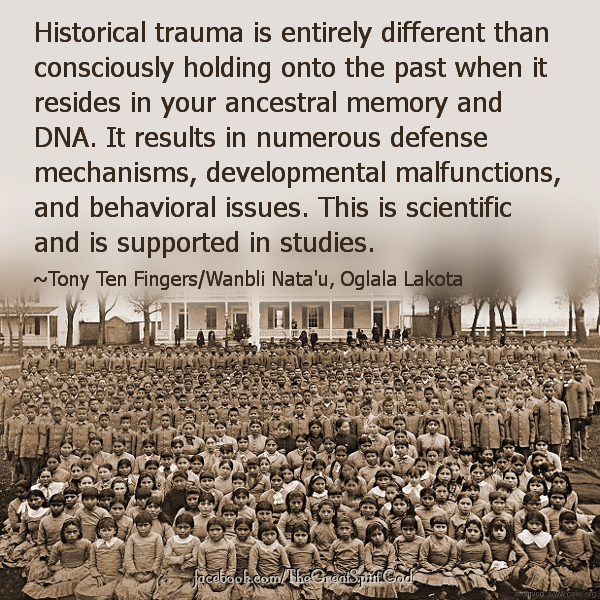 This was published earlier on my other blog

American Indians know warfare. The hair stands up on the back of the neck at the mere mention of several deliberate massacres called Indian Wars in North America.  It’s estimated 95% of the American Indian population was killed by war since first contact.

Every Indian has heard the words: the only good Indian is a dead Indian.

So if you can’t kill all the Indians, you civilize them. (Like in the residential boarding schools.)

The earliest form of America’s colonial warfare is when the missionary hand-delivers a message to a tribe: Christianize or die.  Tribes in New England convert and call themselves the Praying Indians.  For centuries, men in robes invaded with rosaries and crucifixes.  God’s men erect churches so they can teach Indian communities their way and declare it’s illegal for Indians to do sweats or hold ceremonies. The white God gave these orders.

From east to west, government overseers and militias dole out rules, rations, and alcohol. The Great White Father (America’s president) amends traditional hunting territories and instructs Indians to farm, not hunt.  Marched to isolated reservations on Trails of Tears, many Indians starve (or die) en route. Treaties fence in the Indians so rations of food and medicine would need to be delivered.  One government agent in Minnesota says, “Let them eat grass,” and steals their rations. The 38 Lakota men who fight to get the rations back are hung in a mass execution, ordered by then-President Abraham Lincoln.

Then a new round of messengers arrived as religion-wearing ministries and government social workers. Their message: Indians are not good enough to raise their own children. The Hopi resist and 17 of their men get sent to Alcatraz. Wagon-loads of Indian children are carried east or far enough away to be assimilated and taught in schools like Haskell and Carlisle. Some kids never find their way back to their parents or reservations. Generations of Indian kids are targets to be Christianized and civilized by these schools.

In the same manner of warfare, Indian children are placed in orphanages, foster homes or with non-Indian parents. The American government creates the Indian Adoption Project (IAP) run by Arnold Lyslo.  These little Indian kids aren’t black or Asian but exotic; their race is romanticized by Hollywood, and anxious adoptive parents sign up. Couples who had trouble conceiving a baby could have one or two Indian kids right away.

Lyslo travels to different states to convince the social workers to line up white parents for the flood of Indian kids being snatched for adoption. (In 16 states, 85% of Indian children were removed from their tribal parents). 395 parents agree to take part in Lyslo’s study and answer questions about their adopted Indian kids every year.

Lyslo claims poverty is the reason these children needed to be “saved” and adopted.  ARENA continues and expands after the IAP. Thousands of Indian children are wiped from tribal rolls and disappear into white communities. States seal their records and amend the child’s birth certificate.
For over 30 years, Indian kids are the lab rats for Lyslo’s human experiment, to see how well Indian children will adapt being adopted. This warfare is called assimilation.

By 1976, American Indians go to Congress with these abduction stories and ultimately create the Indian Child Welfare Act.