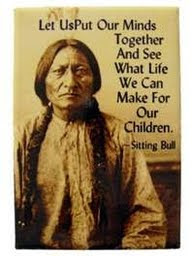 By Trace
Last week I did write a statement and submitted it via email to the BIA.
I also read the Regulations for State Courts and Agencies in Indian Child Custody Proceedings and made a comment as an adoptee, as an advocate for other Native American adoptees and as an unofficial expert since I have authored three books (one as a memoir) about the Indian Adoption Projects.


“That’s been the plan from the beginning,” Bradley Goodsky told a mostly sympathetic audience at Mystic Lake Casino on Wednesday. “It’s like [child protection] has a crystal ball and we’re doomed to fail.”
Goodsky was one of the speakers to address federal administrators who are considering making it more difficult for social workers to put Indian children in foster care. The Bureau of Indian Affairs is proposing new rules that it says will strengthen the Indian Child Welfare Act, the 1978 law passed by Congress to stop the “often unwarranted” breakup of Indian families.
The act provides guidelines to child protection agencies and juvenile courts that set a high standard for placing Indian children into foster care, and it gives tribes a say in those cases. The proposed changes would raise that bar even higher, by requiring that child protection and the courts first determine if a child is Indian, and then only remove that child from a home where there is “present or impending risk of serious bodily injury or death.”  Kevin Washburn, the U.S. Interior Department assistant secretary who leads the BIA, is touring the country with other agency officials to hear from tribes and the public about the proposals.

“Guidelines are great,” Washburn told the group at the casino in Prior Lake. “We need things that are legally enforceable.”

But those voices were far outnumbered by speakers who told stories about the damage caused to Indian children by being separated from their culture.
“Native adoptive souls have been stolen,” said Gio Cerise, who was just 2 weeks old when adopted into a non-Indian family in 1965. “Our souls cry.”

Do you have your written comments in yet? They are due May 19.