(CBS News) A year ago, a Philadelphia man clicked on a website for missing children, and found a picture of himself. That discovery sent Steve Carter on a search to unlock the secrets of his past.

Carter always knew he was adopted, but when got older, he started to wonder who his biological parents were. That curiosity and a simple web search took him on a journey that would change his life and even now, there are parts of his story that remain a mystery.
Read here:

The following is a gallery documenting Carter's incredible life journey as featured on "CBS This Morning." 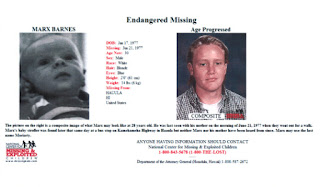 On June 21, 1977, 5-month old Marx Panama Moriarity Barnes disappears with his mother, Charlotte Moriarity, from Haaula, Hawaii. They are reported missing three weeks later. Marx's father, who is not married to his mother, launches an all-out search, but finds nothing.
Credit: Steve Carter