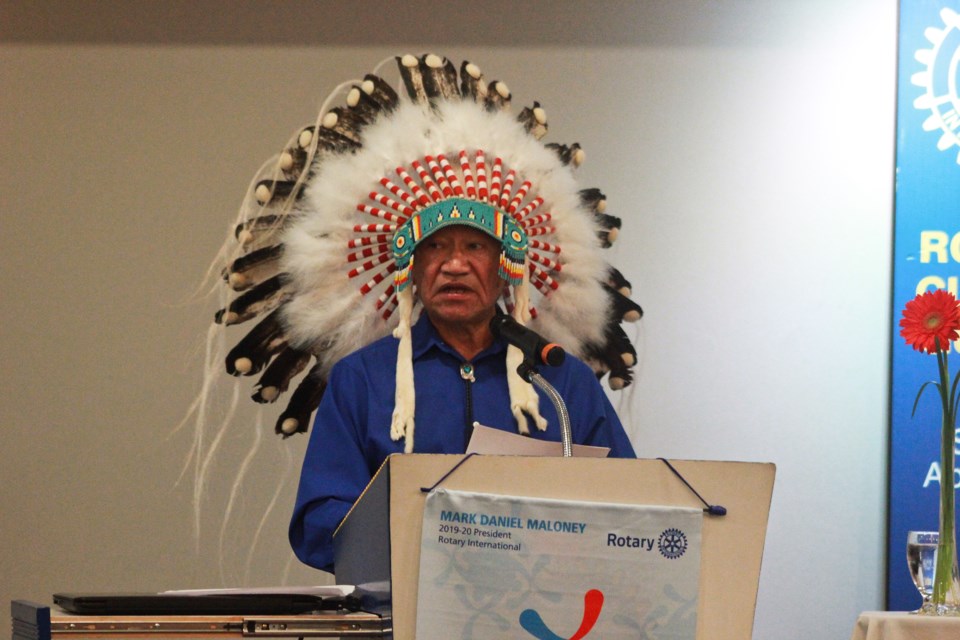 It was a full house, many wearing orange shirts to recognize Orange Shirt Day, at the Italian Canadian Club Friday as community members gathered to hear Indigenous author Edmund Metatawabin speak about his residential school experience.
Several members of the community gathered as Metatawabin, a past recipient of the Order of Canada, spoke at the Rotary Club of Guelph.

The organizer of the event, Dianne Dance, said that the fact that many people came to the event shows that there is a sincere wish for reconciliation.
Dance said it is important to recognize the suffering of Indigenous peoples as Orange Shirt Day is right around the corner.
“It's still impacting today and we need to understand that in the spirit of reconciliation,” said Dance.
Metatawabin spoke about his personal experiences where he experienced the pain in residential schools and lived to see his children suffer as well.
“Physical abuse comes in many forms, and without oversight, residential schools liberally applied that punishment,” said Metatawabin, who gave his speech wearing a traditional headdress reserved for chiefs.
He spoke about the helplessness in complying to the rules, the ostracization by the church, being treated like a criminal by the police, the scars on his body from a distinct orange strap which gauges the skin as it touches it, being made to stand outside minus-40 C overnight, suffering repeated slaps on both sides of the face, squatting for four hours on the concrete floor, not being able to access water to drink along with very few washroom privileges, getting electrocuted on an electric chair and being forced to eat his own vomit.
“These are only a few, as there were other inventive ways to inflict pain or discomfort on the children. Sexual abuse committed by the bishop, the head priest, and other staff. When a girl was pregnant, it was abortion,” said Metatawabin, who still remembers his status number of that school.
Like any father, he said, his heart would ache for the touch, noise and demands of children and having suffered humiliation first hand through pain methods, the immediate and long term effects can never be forgotten.

A standing ovation followed Metatawabin speech which left the audience moved and he was given a certificate of appreciation in recognization of his presentation.
Ontario Regional Chief of Taykwa Tagamou Nation RoseAnne Archibald spoke about one of the most powerful results of residential schools being intergenerational trauma which is trauma that gets passed down to generations, and which each subsequent generation, that generation ends up with less coping skills to deal with the trauma.
Archibald said the results of intergenerational trauma are evident in First Nations people in Canada and added that even though it subsists, the First Nations People like all human beings have a propensity towards healing.

“So now we are now entering the age of healing and to have an organization like the rotary club of Guelph stand shoulder to shoulder with us really means something,” said Archibald.
“It means something that you are our allies in that healing process so I thank you for that."

One of Metatawabin's last words acknowledged the rank of women in Indigenous culture.
“For a long time, we have acknowledged and we have known that the leader within each sacred fire is the woman, is the creator. If you think of the creator, none of us would be here without the women.”
He said women were placed in the centre of the fire, the children after and the men outside of the fire who served as protectors highlighting the important role children play in society.
Acknowledging the current climate strikes that have been taken globally, he spoke about the importance of caring for the next generation.
“When the Europeans came, trees were cut. The real owners of this land are not yet born. Were just caretakers to make sure they have food and resources and clean stuff to use — what Greta is talking about.”
“Listen to her and support her.”
source