Many of the 11.7 million people who tuned in to the Hip's final concert in August 2016 might have been surprised to hear Gord Downie speak out about Indigenous issues. In the new documentary Long Time Running, Downie says his plea that night to remember the plight of First Nations was a spontaneous decision. But his passion wasn't.

A trip north in 2012 led to the wry song Goodnight Attawapiskat, about the troubled northern Ontario reserve. Prime minister Stephen Harper's 2008 apology to First Nations led to 2009's Now the Struggle Has a Name. But you can go back to Looking for a Place to Happen, from the 1992 album Fully Completely, for a much earlier glimpse of the Indigenous sympathies in the Hip's music. It was indicative of the Hip's everything-to-everyone appeal that this song about colonialism became a sort of bro anthem among high school students in the early '90s.

In the year prior to his death, Downie released a solo album called Secret Path, about 12-year-old Chanie Wenjack, who died fleeing a residential school in 1966.

On the issue of the treatment of Indigenous people, Downie recently said, "We are not the country we think we are." READ MORE 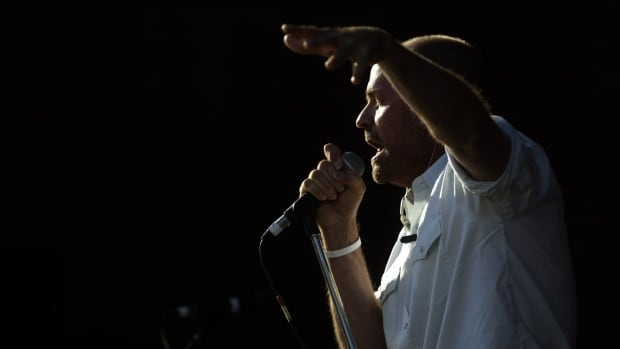 We have a National Residential Crisis Line for survivors and those who need it. Call toll-free & in confidence. pic.twitter.com/YJbKvGWJ5z
— NCTR (@NCTR_UM) May 30, 2016