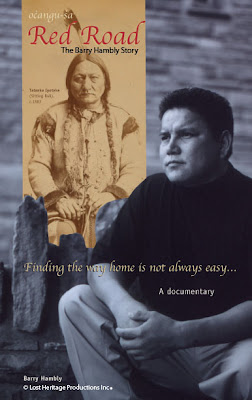 Ocangu-sa Red Road next airs on:
Ottawa time is shown.

One Man's Search for Identity

The events that lead up to the removal of Barry Hambly and his three brothers from their mother, reflected a series of policies that adversely affected — and continue to affect — First Nations people.
Barry's mother, Darlene Whitecap, has experienced firsthand the impact of these policies on her life, and the lives of her children. Darlene Whitecap was raised on a reserve and taken away to a white-run residential school at age four.
Eventually returning to the reserve, she found herself in an abusive relationship when she was 16.  By the time she was 24 years old, with four young children, alcohol had become a part of her life. It was then that she decided to run from the reserve to Regina. Soon after, she would lose her children to social agencies due to her alcoholism.
The adoption policies of this era were controversial and became known as the "Sixties Scoop."
Red Road was produced by Lost Heritage Productions in association with Life Network, and with the financial participation of the Canadian Television Fund (CTF).