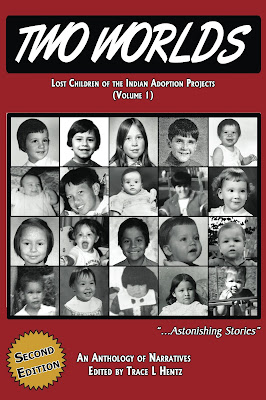 
After generations of Native children were forcibly removed from their Tribes and placed in residential boarding schools, children were also being placed in closed adoptions with non-Indian families in North America.


Finding those children became a mission for award-winning Native American journalist-adoptee Trace A. DeMeyer who started research in 2004 which culminated in her memoir “One Small Sacrifice” in 2010.  DeMeyer was introduced to Cherokee adoptee Patricia Cotter-Busbee, and the collaborated on their new anthology, “TWO WORLDS: Lost Children of the Indian Adoption Projects.”  The book hits Amazon and Kindle in September. (ISBN: 978-1479318285, Price: $19.95 (PAPERBACK), $6.99 (EBOOK).


“Readers will be astonished since these narratives document a page of North American history that few even know happened,” DeMeyer said. “Today tribal families hope to reconnect with adoptees but we know closed adoptions were planned to assimilate children, to erase their culture and end contact with their tribe. I started this project in 2008 after my memoir, then adoptees wrote to me.  When I met Patricia in 2010, she shared her own amazing story and I knew she had to be part of this book.”


A recent MFA graduate of Goddard in writing, Patricia Cotter-Busbee welcomed the chance to contribute and help edit. “I could not resist helping with this important book. I felt that this was the project I had been waiting for. I kept thinking where are all these adult adoptees? I am an adoptee and know how badly I wanted to reconnect with my first families. If 1/4 of all Indian children were removed and placed in non-Indian adoptive homes, these adoptees must be looking for help, trying to open records and find clues to their identity. One study even found in sixteen states in 1969, 85 percent of the Indian children were placed in non-Indian homes. This book will help lost adoptees reconnect.”


The Lost Children in Two Worlds share details of their personal lives, their search for identity and their feelings about what happened to them.


“The history of the Indian Adoption Projects is troubling since it was unofficially ethnic cleansing by the US and Canadian governments, and this practice went on for years without public knowledge, but I am happy to report it failed because we are still here and still Indians; and this book explains how we adoptees did it,” DeMeyer said.


DeMeyer and Busbee agreed that “TWO WORLDS: Lost Children of the Indian Adoption Projects” is an important contribution to American Indian history.


“Indigenous identity takes on a whole new meaning in this anthology,” Busbee said, “both for the adoptee and those who adopted them.  Adoptees definitely live in two worlds and we show you how.”


The book covers the history of Indian child removals in North America, the adoption projects, their impact on Indian Country and how it impacts the adoptee and their families, Congressional testimony, quotes, news and several narratives from adoptees in the US and Canada in the 384-page anthology.


“Two Worlds is really the first book to debunk the billion dollar adoption industry that operated for years under the guise of caring for destitute Indigenous children,” DeMeyer said. “Readers will be astonished since very little is known or published on this history.”