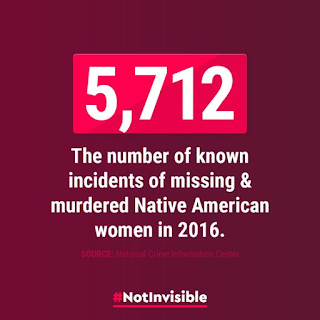 As we have posted on MISSING AND MURDERED INDIGENOUS WOMEN and GIRLS on this blog here, here, please watch this episode of DATELINE:   HERE
By Dateline NBC

In August 2016, Carla Yellow Bird disappeared. She suddenly stopped texting and calling, and that didn’t sit right with her mother, Loretta, and sister, Kerry.

So they reported Carla missing to the Mandan Police Department in North Dakota.

Carla’s roommate said that she may have gone to a town called Saint Michaels on the Spirit Lake Reservation in North Dakota, the day she stopped communicating.

Spirit Lake is a reservation that spans 400 square miles, and it’s located about three hours northeast of Mandan, where Carla lived.

Lissa Yellow Bird has dedicated herself to searching for missing and murdered Native American women. This time, she would be helping to find out what happened to her own niece.

And the information provided by Carla’s roommate, gave her somewhere to start…

Lissa and many others believe that, too often, the cases of Indigenous women are ignored. Lynnette Grey Bull, activist and founder of Not Our Native Daughters, agrees. Lynnette describes her organization and why the MMIW movement hits close to home. READ MORE

You can watch on Peacock TV as well.

The podcast version of the full episode is also available.

AND use the search bar for more on this topic: #MMIWG and MISSING AND MURDERED

Minnesota is one of only seven states to have established a task force to study the prevalence of violence against Indigenous women and girls.

“Bring Her Home: Stolen Daughters of Turtle Island” opened earlier this year at All My Relations Gallery in Minneapolis, and is now on display at the Fargo Public Library.

Walkthrough of the MMIW art exhibit “Bring Her Home: Stolen Daughters of Turtle Island” from Unicorn Riot on Vimeo.

MMIWG on my other blog

Over 1.5 million Native women have experienced violence, including sexual violence, in their lifetime according to the National Institute of Justice. Native women experience violence of twice the rate of women in the U.S. and on some reservations, the murder rate of Native women is 10 times the national average. In 2016, 5,712 cases of missing Native women nationwide were reported to the National Crime Information Center. Only 116 of them were logged in the U.S. Department of Justice’s missing persons database, according to the Urban Indian Health Institute.

READ: The Crisis Of Murdered And Missing Indigenous Women And Why Tribes Need The Power To Address It – The Appeal