How much I changed (Part 5) #adoptionsurvivors

I gave this interview some time ago but my thoughts still stand...Trace
Take a read:


Interview with Australian blogger ONCE WAS VON in 2011
old link: http://eag-oncewasvon.blogspot.com/search?q=One+Small+Sacrifice 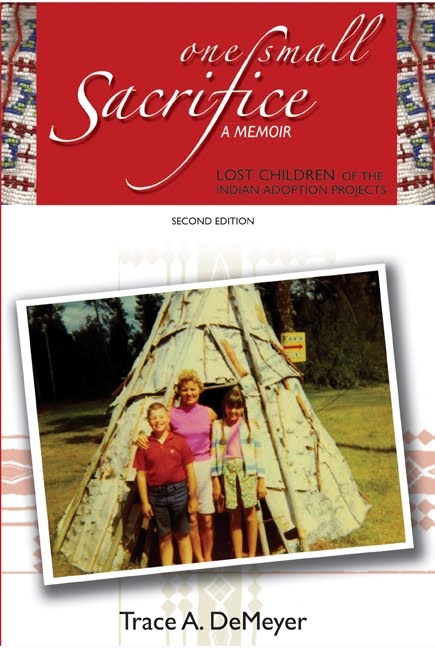 Trace DeMeyer published her first book ONE SMALL SACRIFICE on the Split Feathers, the children taken from the First People of Turtle Island or the United States of America as it was renamed by those who claimed it. The Split Feathers (adoptees) were taken for education and for adoption in planned destruction of their Peoples. Many have not been found or found their way home. Trace includes the story of her own journey and tackles the difficult areas of adoption and the adoptee experience.

Von: In your life was there a pivotal event that changed you from being a victim of adoption to a survivor?

Trace: That is a great question because lots of people won’t recognize there is a definite shift from victim to survivor.
When laws restrict opening adoption records, these policymakers make us victims. There are many adoptees ready to know their family name, meet relatives and have reunions, but cannot because of adoption laws. Other adoptees, lulled by gratitude, may fear upsetting their adoptive family, and may not see themselves as victims of a corrupt unjust system.
The adoptee moves from victim to survivor when they decide to break the law, when they decide to regain and restore their own identity, and get their name. That’s a giant leap forward.
My becoming a survivor happened in stages, in a sequence of events. As a child I grieved. I promised myself as a teenager that I would find answers but it looked impossible with sealed records in Wisconsin. I felt overcoming my low self-esteem was first. In my 20s, I realized there would be “emotional processing” I’d need to do, slowly, over time. Opening my adoption records was very important in 1978 but troubling since I had no help to locate my parents. This was before the internet. I also had to face reality that I might not find them or my parents might not be willing to meet me. I never met my mother Helen which felt like a second rejection in the 1990s. I was almost 40 when I met my father Earl in 1994. Reunions (or not having a reunion) take time to process. Over the years, other adoptees were great teachers for me since there are no guidebooks for dealing with adoption trauma. There is so much to understand, obviously.
Writing my memoir, remembering everything again and adoption research changed me most – like a light bulb went on. I started to see adoption as an industry and a measure of control over a mother’s maternity and placed orphans in a state of emotional disgrace. Recognizing adoption as an institution, one that has outgrown its purpose, one that is damaging for mother and child, was perhaps my biggest transforming moment.

Von: You say in your book, that adoption involves many traumas, not just the one of the loss of a mother. Many of the things that happen to us, the damaging relationships, breakdowns and illness result from those traumas. How do we move from being vulnerable, to strength and survival?

Trace: In my book, I mention four distinct traumas for adoptees and I know there are more. Adoptee and natural parents are vulnerable to the billion dollar adoption machine that still manipulates us. I felt manipulated. Restricting us from meeting, laws which prevent our meeting, then add a dose of shame, judgement and misunderstanding, all deeply affects and even harms adoptees. I do write about this in depth in “One Small Sacrifice.”
Adoption is very isolating. Many adoptees like me suffered in silence. I see many adoptees create stories for their missing parents. If they do not know the truth, and never meet them, adoptees can stagnate emotionally and get trapped in illusions, lies and excuses. That is a very hard way to live. It’s very difficult to tell an adoptee what to do, or how to heal and overcome this vulnerability. I took small steps on my own and finally realized that there was only one solution – find the truth.
A closed adoption is the ultimate act of disruption. Because of my disgrace and orphan-status, I was not living emotionally well. I was not empowered as a human since the very act of adoption removed my identity. I made a decision to not live this way or accept the fantasy-land my adoptive parents and adoption industry created for me. I had to open my adoption, period. I would not give up.
It took me a long time to see how I failed myself with very troubling decisions and blamed Helen my birthmother for misery I had as a child. I fought the idea of being a disgrace. I fought feeling rejected by Helen when I finally found her. I fought very hard to heal myself, know myself and release judgment. Even as a teenager, I thought it was ridiculous to be expected to live a fantasy and project gratitude.
Finding the truth and meeting relatives moves you from feeling vulnerable to empowered, from victim to survivor.

Email ThisBlogThis!Share to TwitterShare to FacebookShare to Pinterest
Labels: adoptee trauma, how much I changed, One Small Sacrifice, The Life of Von, Trace A. DeMeyer