$1.3 billion in damages: #60sScoop get their day in court 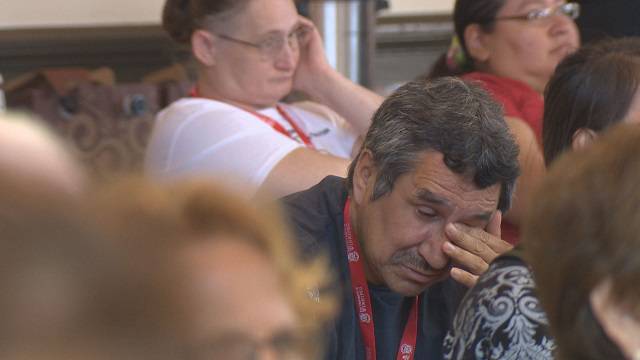 Thousands of First Nations, Métis and Inuit across Canada who were ripped from their homes as children are getting their day in court after a years-long struggle in what has become known as the “Sixties Scoop,” a painful, but little-understood chapter of Canadian history.

The so-called scoop happened between the 1960s and the 1980s and saw thousands of aboriginal children taken from their homes by child-welfare service workers and placed with mostly non-aboriginal families. In some cases, children were sent to live with families in other provinces, the United States and the U.K., often without the consent of their parents.

A  legacy of  ‘cultural genocide’

The fallout from the practice has negatively impacted generations of aboriginal Canadians.

The final Truth and Reconciliation Commission report stated “the effects of the residential school experience and the Sixties Scoop have adversely affected parenting skills and the success of many Aboriginal families.”

“By the end of the 1970s, the transfer of children from residential schools was nearly complete in Southern Canada, and the impact of the Sixties Scoop was in evidence across the country,” the TRC said.

The “Sixties Scoop” has not received the same attention as another dark chapter in Canada’s history: the issue of residential schools. And unlike survivors of the residential school system, adults who went through the Sixties Scoop have never received an apology from the federal government. Last June, the Manitoba government formally apologized to those affected.

Marcia Brown Martel, a member of the Temagami First Nation near Kirkland Lake, Ont., was taken by child welfare officials and adopted by a non-native family as a child.

Martel has described what happened to her and thousands of others as “cultural genocide.”


Dozens of supporters rallied outside a Toronto courtroom Tuesday where an Ontario Superior Court judge will hear opening arguments for a summary judgment in a class action lawsuit against the federal government by survivors of the Sixties Scoop.

At the heart of the Ontario lawsuit, is a federal-provincial arrangement in which Ontario child welfare services placed as many as 16,000 aboriginal children with non-native families from December 1965 to December 1984.

The claim, which has not been proven in court, alleges the children suffered a devastating loss of cultural identity that the federal government should have protected. The suit alleges plaintiffs suffered emotional, psychological and spiritual harm from the lost connection to their aboriginal heritage.
They are seeking $1.3 billion in damages, or $85,000 for each affected person.

Lawyers for the plaintiffs will argue they have enough evidence to forego a trial and prove that Canada had an obligation in law to ensure that indigenous children removed from their homes retain their cultural identity and heritage.

Tuesday’s hearing comes after seven years of delays due to appeals by the federal government, which has fought the claim since it was launched in 2009.

Calls on Ottawa to recognize an ‘immense wrong’
A number of indigenous leaders called on Prime Minister Justin Trudeau in an open letter to resolve the issue without further delay and to “recognize and right an immense wrong — with both words and deeds.”

“This case is about Canadian values – past, present and future,” the letter says. “This moment is an opportunity for Canada to put an ugly legacy behind us, for the government to take steps to reform its conduct so that the injustice does not continue and build a better future for all. It’s a chance to open the door for future generations to grow up healthy and proud of who they are.”

Federal Indigenous Affairs Minister Carolyn Bennett has said she wants to see the lawsuit over the Sixties Scoop taken out of court.

“We, as you know — as a government — would like to get things out of court and to a table where we can make those kinds of agreements together, as a way forward,” Bennett told reporters in Winnipeg in August.

“We want to work together with all of the litigants that are presently in court and try and get to the table.”
*With files from the Canadian Press