#MMIWG: #cdnpoli responses to the HIV crisis have compounded the problem 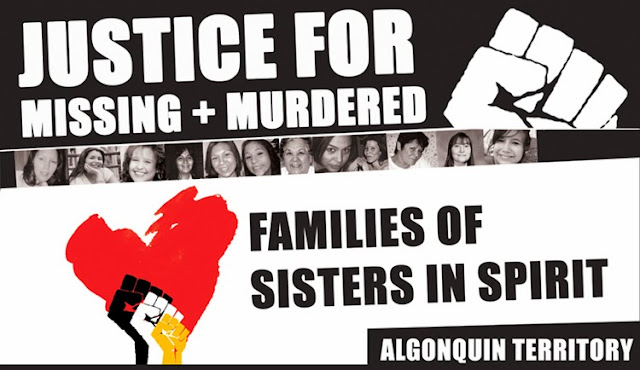 During the then-Conservative Government in 2012, the government made $165-million-dollar budget cuts to Aboriginal and Northern Affairs Canada[1] (as it was then known). Some of these cuts led to decreased funding for health-related research programs, like the work at National Aboriginal Health Organization (“NAHO”).

The last fact sheet posted to NAHO’s site, which is scheduled to shut down in December 2017 indicates that Indigenous people “account for 16.4 per cent of AIDS cases in Canada and 7.5 per cent of HIV infections.” For Indigenous women, the picture is even more alarming: Indigenous women making up 47.3 per cent of HIV-positive test reports; meanwhile, non-Indigenous women making up 20.5 per cent of the same reports.
For the past 25 plus years, Kecia Larkin has been one of those Indigenous women living with HIV. And, the morning that I call Kecia Larkin, she is in British Columbia; she’s just making breakfast.
In April 2016, Kecia won an award for her work on educating others communities about the realities of Indigenous women living with HIV. But Kecia has always been an activist.
Kecia’s mother was deeply involved with the Red Power movement, American Indian Movement, and she remembers her mother wanting to put some roots down after attending protest after protest, all related to land and sovereignty.


“We were political,” she explains. “We never felt like it (Alberta) was home.” She describes her family as loving and attentive, but poor: The number of First Nations Children living in poverty is fifty percent.[2]

Because of poverty, though, Kecia made the decision to go into state care. During that time, she was in and out of hotels because she says, “I didn’t want to go to foster homes.” And during times when she needed help, she would go into group homes but then return to the streets, “It was a choice made out of duress, because of poverty.”

To address these barriers, Poitras says to me that it is important to learn about the history of Indigenous peoples in Canada, including the intergenerational effects of Indian Residential Schools.  Or, “connecting the dots” as Poitras calls it.

Returning to the theme of home, Kecia says, “Home is a big theme in my life…there is always a part of me (wanting) the stability of a home…I could never have that or create that until now.”
Nearly forty-five years later, she says, “It has taken forty years to heal, to come full circle.” Kecia continues, “When we talk about home, it is where I feel the safest, where I can be myself. I feel very lucky to have what I have today. I know I made home when my kids don’t wake up scared.”