Taken from their families as children, aboriginal adoptees find hard road to reconnect with culture 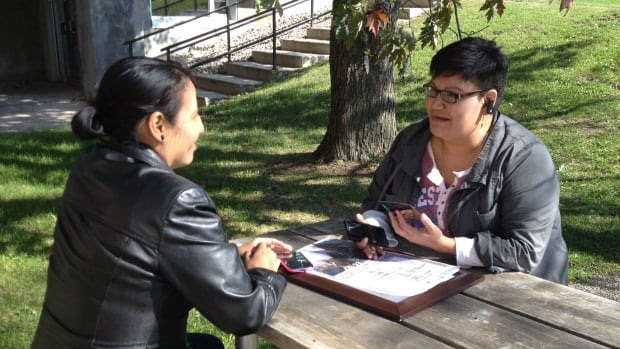 Leslie Parlane (left) and Colleen Cardinal are part of a group of aboriginal adoptees who are organizing a national gathering this weekend. (Waubgeshig Rice/CBC)

Aboriginal adoptees support network 2:25
When Colleen Cardinal and Lesley Parlane met in Ottawa a year ago, they bonded right away as adoptees reconnecting with their aboriginal roots. It’s been a long, often difficult journey for both women.
“I didn’t even know that I was indigenous until I was a teenager,” says Cardinal, now 41. Originally from Saddle Lake Cree Nation in Alberta, she was adopted by a non-indigenous family when she was two, and raised in Sault Ste. Marie, Ont.
“I didn't even know what it meant to be indigenous because of the stereotypes and stigma towards indigenous people, that I would say my adoptive family perpetuated,” she said, “that we were drunks and bums and stuff like that. So I grew up with this really negative image of what Indians were.”
From the 1960s up until the 1980s, Canadian child welfare authorities apprehended an estimated 20,000 aboriginal children and placed them in non-aboriginal homes. Many consider the '60s Scoop an extension of residential schools, which aimed to "take the Indian out of the child."
Cardinal didn’t reconnect with her birth parents and older sisters until she was 16. It’s a breach that Parlane is painfully familiar with. She’s originally from Standing Buffalo Dakota First Nation in Saskatchewan. She was adopted when she was four, and after a stint in Alberta, spent most of her childhood in Toronto.
“It's one thing to be adopted,” says Parlane, 36. “But it's another thing to not know your language and your culture. And that has had the biggest impact on my life.”


Finding 'some kind of belonging'

Cardinal and Parlane are part of a group of indigenous adoptees who meet regularly in Ottawa. Last year, they decided to organize a national gathering for other adoptees like them.
This weekend, nearly 100 people from across the country and as far away as New Zealand will be in Ottawa for the Bigiwen Indigenous Adoptee Gathering. They’ll participate in workshops, network and, most importantly, make new friends.
“Adoptees are looking for some kind of belonging, some kind of place to talk about their stories and share their stories with others,” says Cardinal.


'It may seem like it's easy to just integrate back into your biological family … but if you go back to it without your songs, your ceremonies, and your language, it's really hard to reintegrate.'— Colleen Cardinal

For many adoptees, returning to their roots after being raised away from their communities is hard.
“It may seem like it's easy to just integrate back into your biological family," she says. “But if you've been raised a certain way, and you go back to it without your songs, your ceremonies, and your language, it's really hard to reintegrate.”
But with a growing support network, both Cardinal and Parlane believe it’s becoming easier to share experiences and return to birthplaces. Parlane spent the summer with some of her birth family back in Saskatchewan.
“I made a connection with my mom's side of the family, and I recently went powwow dancing for the very first time this past summer,” she says. “It was amazing, because for me that was … all these years of not having a connection to my culture, the doorway just suddenly opened through my aunt.”
By sharing their own stories, they hope to open the door for other adoptees.