What we learned at Brock University about #60s Scoop #ADOPTION

I'd mentioned on this blog we were invited to speak to students and then the general public at Brock University near Niagara, Ontario on March 25.  Patricia Busbee and I had co-authored and edited the 2012 anthology Two Worlds but we had not met in person (but we've shared hundreds of emails and phone calls).

You ever have that feeling you've known someone but you've never met them in person? Well, that was the feeling I had with Patricia. I snuck up on her at the hotel near Brock and instantly - she's like my closest friend, a sister returned to me.  Being in the same room with her felt like being home. When she offers her thoughts, insights, it's like she's reading my mind!

At Brock, we met with two other contributors in Two Worlds and again, it was deja vu! Debby and Elaine are like sisters, too! You can read their adoptee narratives in the Canada section of Two Worlds.

One thing is certain - we understand one another. We are simpatico - of like mind. Debby and Elaine shared the same feelings of isolation growing up -  though they were adopted and being raised in Canada while Patricia and I were here in the US.  We were all told lies about our ancestry and yet we found the truth and our relatives anyway - but it was not easy for any of us.  Adoptees do feel very isolated until we meet other adoptees. Then like magic, POOF, you made new relatives. This book and the event at Brock gave us all a great gift: our very own reunion!

We as a group went to speak to a class of about 40 students at Brock who had read Two Worlds and they were very open and appreciative to our writing and what we shared that day. The students really liked the book, and asked really good questions about how it was growing up away from our families and culture. The take-away for me is students admitted they knew NOTHING about this adoption history prior to reading Two Worlds.  They really knew NOTHING about the First Nations in Canada and were not taught anything in their school.  Their eyes were opened, obviously!

Knowing what is truth all goes back to BAD HISTORY. When you allow a country to devise its own telling of conquest and colonization, leaving out how they did it, how Indian people were killed off or made to disappear to remote reserves and then they abduct children for boarding schools and adoptions, that is just bad history.  It's 2014, still happening...

During the evening panel and book talk, an Anishinabe adoptee named Michael shared his experience. (Michael and I had been emailing since 2011 and finally met. He and his wife Irene are like long-lost relatives as well!)  Michael shared the story of how he needed his name for when he passes on to the spirit world and how he needs to speak this name in his language or his soul would be lost. Michael shared so much wisdom.  He asked, "I know where five percent of the adoptees are - where are the other 95%??" [He was referring to 20,000+ placed into adoption during Canada's 60s Scoop, what is known in Canada as cultural genocide.] [The US numbers are sealed so we don't know how many babies and children were lost here.]

And we met Jolene, an adoptee from Arkansas who also shared her adoption story that evening and how she plans to return to her British Columbia tribal family in two years.  I knew some of her story from a news article Brock University has posted about her. And we met a friend Lynn (Adoption Trauma) who brought Suzanne, a beautiful Native woman in great pain over the loss of her sister. And I spoke to the daughter of an adoptee; her father spent his life visiting the reserves but was never able to open his adoption or find his own First Nations family.


What we learned is there is no way to stop adoptions of Native children in this Six Nations area in eastern Canada today: we heard this is because of a shortage of foster homes, plus destitute conditions and not enough available adoptive parents on their reserves.  What First Nations social workers do give to these babies is all the information and history that they will need when they become adults, when they decide to look for their birth families. They practice open adoption and use friendship centres so adoptive parents can bring the children and expose them to their culture, language and relatives. And we all agreed that something has to change in both countries to allow babies to remain with their mothers and tribal relatives, with every effort made for family preservation and finally eradicating poverty on the reservations.

Being there with relatives, it's like a fire was lit inside me. When the Six Nations women sang a "Strong Women" song for us, it was humbling, a sacred moment.

What we learned is there is much more community-building and after-adoption support needed for Native American adoptees in the US. There are no repatriation services in the US like there is in Canada. That must change! 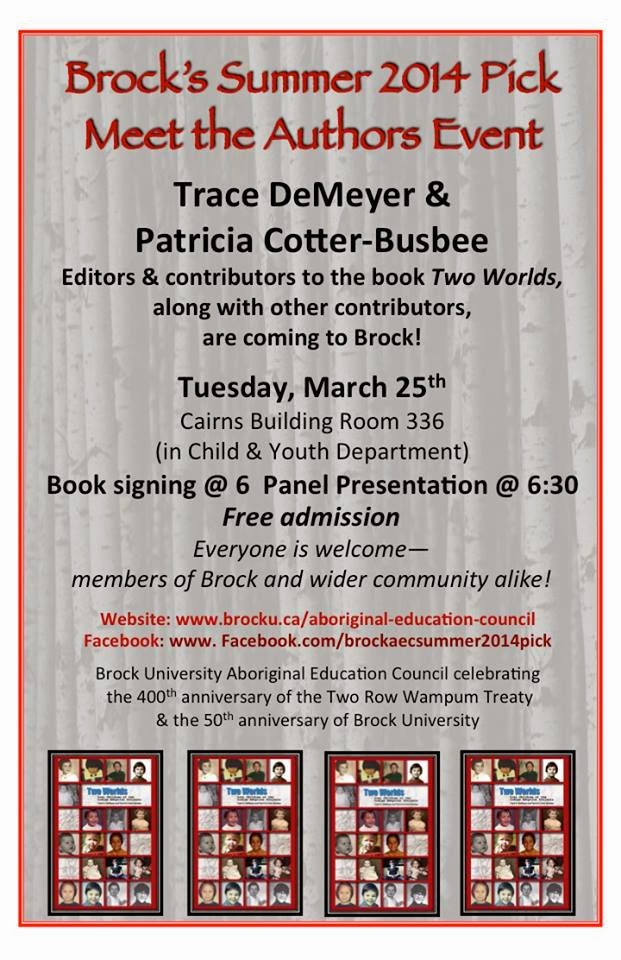 Patricia and I finally connected in person, we made new relatives in Ontario - and all that is good. Now we're starting on the new book CALLED HOME: Stolen Generations and will publish more history and narratives from the lost children of the Indian Adoption Projects in Canada and the US.

Adoptees do have the power to change history with every story we write and share! Every writer in Two Worlds and the new book CALLED HOME can hold their own events and this fire will grow and spread... and that is good, that is very good...

(The Brock Reads Summer Program 2014 is open to the whole community so this book Two Worlds will have many new readers.)

Our deepest thanks to the organizers at Brock University Aboriginal Education Council and the Niagara Native Women for offering this amazing event!