No, I'm not crazy 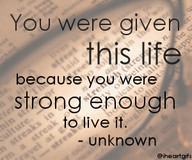 I think about integrating parts of my persona that were buried or stunted or created as an adoptee growing up with strangers.

Last week I had posted on Facebook how I experienced huge chunks of CRAZY, had patterns of unhealthy behavior and even how big blocks of memory seemed hazy or gone. This does not make me any different (or better off or worse off) than others.  If I am to heal myself, I need to know and see how I coped as this little girl who lived in fear and confusion.

My thoughts now?  My crazy hazy chunks of time were in fact self-preservation – it was the only way I could handle what I had to face to avoid fracturing or destroying my delicate developing mind. (And this did happen to others living in a dysfunctional setting in childhood.) I am now aware I had various coping tools, as did my friends. One of the best tools was a vivid imagination. Another one: listening to the small voice inside, a voice of sanity and clarity. Another tool was determination. I was determined to survive and very determined to create a safe environment for myself as a young adult, when I could move physically and emotionally away from where I was raised. I was determined to open my adoption and find my relatives and my ancestry. I never lost that determination. I grew strong.

I had a conversation a few days ago with co-author Patricia [Our anthology is Two Worlds: Lost Children of the Indian Adoption Projects] about this process of integration, how we created little people who could handle situations, a character and persona tougher than us – and now as grown-ups, these little people are no longer needed.  I am not suggesting we had multiple personalities. That is too psycho-speak for us.  As babies and toddlers, we were confronted with strangers who called themselves our parents and they had their own instability. (Both of us had an alcoholic parent). Their imbalance caused our childhoods to be terrifying and unstable. That can put us in a situation of weakness and vulnerability. Our real fears made us very unstable and untrusting.
We chose to survive so we had to be creative in some way. Being creative is an outlet for a grief this enormous. Patricia is definitely an artist and I was a musician – and we both kept journals.
Add to that we are abandoned as infants and not nurtured and denied the bonds with our mother-creator. That also created an instability and frailty that carried forward from childhood to adulthood. This trauma is called the PRIMAL WOUND. Read Nancy Verrier if you are curious.

Split Feathers, what American Indians call adoptees or their lost children, have this integration challenge.  It has nothing to do with being crazy, though adoptees tell me they feel like they acted crazy in trying to deal with the strangers who raised us.  I don’t see how we could not be crazy. What other method would work? We had to be split.

Patricia and I are both Native adoptees.  We know this history now. We know it’s historical trauma in our DNA. We know we have the tools to heal this ourselves.

Even as kids we could see we were very different from our stranger parents, yet adoption forced us to pretend, be good and show we were grateful.  Isn’t that crazy?

Anyone who questions the Adoption Cartel (and their propaganda and billions in profit) will be called crazy.

There are couples right now holding a bake sale, asking their friends to raise money so that they can adopt an orphan. That is crazy – dangerously crazy! Read The Child Catchers if you want the truth about orphans (and how many of these children are not orphans at all but have living parents!! They are sold into adoption as a commodity.)