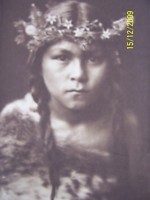 U.S. federal policy toward the Indian tribes was made without knowledge or consideration of the values of the Native people themselves. In addition, educational curricula (school books and lesson plans) and teaching came from a Eurocentric-White perspective and completely neglected any mention of tribal ways of life.

American Indians, especially those who live on reservations, are among the poorest groups in the country. In 1999, 26 percent of the American Indian/Alaska Native population lived below the official poverty level, compared with 12 percent of the total population. Factors such as geographic isolation, limited opportunities for upward mobility in rural areas and on reservations, and low labor force participation rates contribute to a continuous poverty cycle among American Indians. This poverty is often accompanied by a range of social problems —injuries and violence, depression, substance abuse, inadequate health care and prenatal health care, unhealthy or insufficient diets, and high rates of diabetes — that can greatly affect the ability and desire to pursue education.
[Path of Many Journeys, www.aihec.org/resources/documents/ThePathOfManyJourneys.pdf]

Here is an excerpt from a report
A History of Governmentally Coerced Sterilization: The Plight of the Native American Woman, published on May 1, 1997 by Michael Sullivan DeFine, University of Maine School of Law:


The United States General Accounting Office Investigation of the Indian Health Service (IHS) Procedures and the Meaning behind Statistics of Population Growth:

Complaints of these unethical sterilization practices continued, but little was done until the matter was brought to the attention of Senator James Abourezk (D-SD). Finally, affirmative steps were taken - specifically the commissioning of the General Accounting Office - to investigate the affair and to determine if the complaints of Indian women were true - that they were undergoing sterilization as a means of birth control, without consent. The problem with the investigation was that it was initially limited to only four area Indian Health Service hospitals (later twelve); therefore, the total number of Indian women sterilized remains unknown.

From a statistical point of view, the reality of the devastation of Native American women victimized by sterilization can be observed through the comments of Senator Abourezk himself: “given the small American Indian population, the 3,400 Indian sterilization figure [out of 55,000 Indian women of childbearing age] would be compared to sterilizing 452,000 non-Indian women.”

Conclusion: Science has provided a means of categorizing and victimizing those in society deemed unworthy of continued existence. Its influence in academic and political circles has created a pervasive social bigotry that rewards extermination over reform. The failure to embrace the racial and cultural diversity of this country has left a wake of destruction and oppression in minority populations. It is time for the pundits of social change to rearrange their thinking and give back to the people the power to choose what is right for themselves.

[from my archives and research...Trace]