Charles (left) and an actor playing Abe Lincoln.
By Trace L Hentz (taking a break/blog hiatus)
I can't breathe. That is the way I feel.

JUNE 2020: We have multiple pandemics: The 2020 Depression, Covid-19 and the murder of George Floyd, an unarmed man, shown on live TV.
Then I find out my cousin has died.  Dr. Charles Bland, a film scholar historian and genealogist, was almost 80 and he and I had been working on a Native history project for the better part of seven years. I have mentioned him many times on my wordpress blog.

For over a year Charles was suffering with Myasthenia Gravis.  The day before he died (on April 25), I texted and said I wanted to kidnap him and bring him here to western MA and break him out of that New York nursing home. (There were Covid-19 cases but he never caught the virus.)

He texted back, calling me Bonnie and my husband Clyde.
Sadly our rescue didn't succeed. Charlie stopped breathing.
I am raw. I can't breathe. 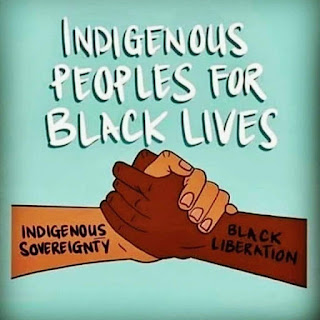 Everything we are seeing globally is seeding a new future. What kind of future? My husband is African-American and he is dealing with the murder of George Floyd in ways I am not. The violence, injustice, racism, what has been happening with the protests, has filled my husband's reality his entire life.  He can't breathe.
The scene in Minneapolis, where I lived for years, is beyond words.  I lived on James Avenue South near Lake Calhoun, or Bde Maka Ska, off West Lake St. I don't think I'd recognize it anymore.

I walked around the lake daily in good weather.  Recently the MN Supreme Court ruled that "Lake Calhoun" in Minneapolis will officially now be known as "Bde Maka Ska." Lake Calhoun was named after John C. Calhoun, the South Carolina senator who became vice president in 1825. Supporters of the change wanted to distance the lake from Calhoun, a documented supporter of slavery.  In 1837, Calhoun gave a speech on "the positive good" of slavery.   He also authored the Indian Removal Act.

NBC News| 5 days ago
Democrats on Friday slammed President Donald Trump for what they said was inciting violence against protesters who were demonstrating in Minneapolis over the death of George Floyd while he was in police custody.

StarTribune|10 hours ago
When the nonprofit's executive director, Kelly Drummer, returned to the scene a few hours later and saw the destruction, she said, "I knelt down and I just cried." The riots and arson that followed protests of George Floyd's death have devastated organizations and businesses that serve communities of color.

The anger behind the protests, explained in 4 charts