Artist Paul Whittam has always wondered about his birth family, as he was adopted when he was just ten weeks old.
He had a loving childhood, but knew he was a member of the Sheshegwaning First Nation on Manitoulin Island and has had a longing to connect with his blood relatives.
During his time at Trent University, he asked an elder for his spirit name, and through a traditional naming ceremony, was given the name Negik, which means Otter.
After finishing his degree, Whittam said he started to deal with depression. He turned to First Nations healers, and one from Manitoulin Island told him he believed he knew who Whittam's birth mother was.
"I was just stunned by this information," he said.
He said his adoptive mother got the adoption records and the information matched. He later found out the healer he was speaking with, named Joe, was his uncle.
Whittam contacted his birth mother through e-mail and the two started to correspond.
"It came to the point about a year later that it was time to go for a visit up to Manitoulin Island," he said.
The two decided to meet on Mother's Day.
"It was a little frightening at first but as soon as I saw her, she looked exactly like me," he said. "We just gave each other a big hug and shared a tear of joy. It's been wonderful ever since then."
Since that moment, Whittam said he's no longer depressed as he now has two families — including a brother and sister.
"My sister's name, her spirit name that was given to her years before I even met her is Young Otter Woman in Ojibwe language," he said
"I had the same name as my sister who I had never met before and I got my [spirit] name when I was at school."
Whittam said he describes his artwork as visual healing through colour, shape and form.
His birth family recently came to the event to see his work. The display is at the Ojibwe Cultural Foundation centre on Manitoulin Island until July 2. 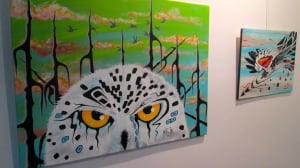