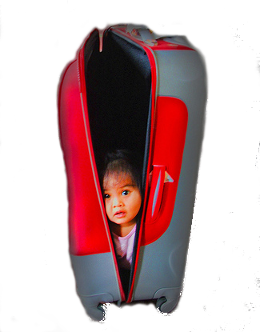 People need to recognize what's being done to parents and children is criminal.  Poor people are offered money to relinquish their child, others are promised an education for their children and their eventual return, only later to find out adoption is a permanent measure. Some children are even kidnapped, and stolen and taken to an orphanage, where there are forced to live in ghastly conditions.
This website section contains discussions and articles about child trafficking in the context of international adoption.  In addition, a collection of known cases of child trafficking can be viewed, demonstrating how the demand for adoptable infants actually creates "orphans" for those wanting to believe international adoption protects poor children from a life of crime and homelessness.

Submitted by OnTheRoadAgain (not verified) on Thu, 2014-09-25
I would like to nominate South Carolina based public relations firm Trio Solutions, and owner Jessica Munday, for the Demons of Adoption Award.
The same professional PR firm that targeted Baby Veronica's father Dusten Brown, pulled out their arrows again and aimed them at yet another father in yet another contested adoption. The exact same tactics (purchasing Facebook likes; setting up an online shop to raise money in a child's name; smearing the father through any means necessary, including nationally-launched press releases; calling in the national press, including CNN; purposely working the public up into an angry lather; having their contractors set up websites to incite anger and hatred of the bio father) were used on John McCaul this year and last. They attempted the same thing with other children's biological families as well, including Baby Dee.
So, I would like to nominate them for their role in meddling in adoption cases and using the weight and cost of an entire Public Relations team to target poorer, less social media savvy birth families.
***Of course I'd like to nominate the Indian Adoption Projects and ARENA, designed and run by the American government, to commit genocide on Indigenous families. It happened and is well-documented in the anthologies Two Worlds and Called Home ...Trace