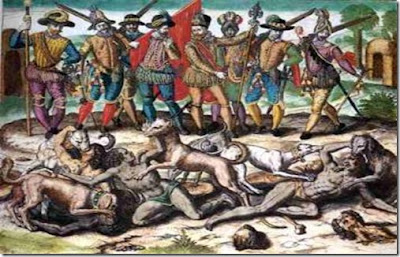 "The power to commit horrible crimes against children, and others, and then absolve itself and the rapists and killers it shields within its ranks, has made the Vatican a criminal, rogue body under every international standard of law and morality."

Read about the Papal Bull and what it means to federal laws here today in the US in the article "Ending Catholicism And Related U.S. Imperialism" by Thomas Ivan Dahlheimer at http://www.towahkon.org/endofimperialism.html
Papal Bull declares the legitimacy of Christian domination over (Indian) pagans, sanctifying enslavement and expropriation of property:

Romanus Pontifex, January 8, 1455 - …We bestow suitable favors and special graces on those Catholic kings and princes, …athletes and intrepid champions of the Christian faith… to invade, search out, capture, vanquish, and subdue all Saracens and pagans whatsoever, and other enemies of Christ wheresoever placed, and… to reduce their persons to perpetual slavery, and to apply and appropriate… possessions, and goods, and to convert them to… their use and profit.* (European Treaties bearing on the history of the United States and its Dependencies to 1648, Editor Francis Gardiner Davenport, pages 20-26)