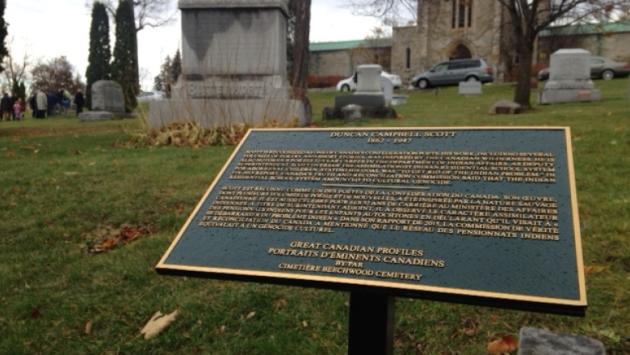 For many Canadians, Duncan Campbell Scott was a renowned poet and public servant — but a new plaque unveiled Sunday at his Ottawa grave site will also let visitors know about his role creating Canada's residential school system.
The revised text on the plaque that now stands beside his Beechwood Cemetery grave points out Scott's "notorious" 52-year career in what was then known as the Department of Indian Affairs.
"As Deputy Superintendent, Scott oversaw the assimilationist Indian Residential School system for Aboriginal children, stating his goal was 'to get rid of the Indian problem,'" the new plaque reads. "In its 2015 report, Canada's Truth and Reconciliation Commission said that the Indian Residential School system amounted to cultural genocide."
The previous plaque, erected in 2011, was almost entirely devoted to lionizing Scott's career as a poet, calling him "one of the outstanding figures in Canadian poetry." The new plaque also mentions his recognition of one of Canada's so-called "Confederation poets."
The new plaque was spearheaded by Cindy Blackstock, executive director of the First Nations Child and Family Caring Society of Canada. She said when she learned about Scott in high school, she was taught nothing about his residential schools legacy.

"I think when we look at Duncan Campbell Scott, many more of us are impacted by ... his residential schools than by his literary contributions," Blackstock told Ottawa Morning host Robyn Bresnahan in an interview on Monday.
"It was about setting the history right, and about giving all Canadians a better understanding of what we need to do in this country to restore justice. ... If we really want to be a country then we must learn from our past, both the celebratory times and the times of struggle, too."

Born in Ottawa in 1862, Scott joined the Department of Indian Affairs as a 17-year-old.
He became the department's deputy superintendent in 1913 and his travels with the department across Canada served as the inspiration for much of his poetry.
Literary critics have pointed out the irony that, at the same time Scott's poetry lamented the decline of First Nations in Canada, his own department was actively working to eradicate those same cultures.
Scott retired from his position as deputy superintendent in 1932 and died in Ottawa in 1947 at the age of 85.
"We realize that his resting place here can serve as a teaching tool for the generations in our midst and the generations to come, that the plaque ... can serve to tell the more complete history that most of us grew up not knowing," said Marie Wilson, commissioner of the Truth and Reconciliation Commission of Canada, at the plaque unveiling on Sunday.