As Indigenous community members and archaeologists continue to discover unmarked graves of Indigenous children at the sites of Canadian residential schools, the United States is reckoning with its own history of off-reservation boarding schools.

In July 2021, nine Sicangu Lakota students who died at the Carlisle Indian Industrial School in Pennsylvania were disinterred and returned to their homelands at Whetstone Bay in South Dakota.

One of these young people was Ernest Knocks Off. Ernest, who came from the Sicangu Oyate or Burnt Thigh Nation, was among the first group of students to arrive at Carlisle, in 1879. He entered school at age 18 and attempted to run away soon after arriving. He ultimately went on a hunger strike and died of complications of diphtheria on Dec. 14, 1880.

My new book “Writing Their Bodies: Restoring Rhetorical Relations at the Carlisle Indian School” explores how Indigenous children resisted English-only education at Carlisle, which became the prototype for both Indian schools across the U.S. and residential schools in Canada. Ernest Knocks Off was 18 when he arrived at the Carlisle boarding school in 1879. He was one of many young Native people who fought – in his case, to the death – to retain their language and culture.

Pratt and his supervisors at the Bureau of Indian Affairs hoped that they could break up tribes by disrupting the transmission of language and culture from one generation to the next. By destroying tribal identities, they hoped to take land in communally held reservations and guaranteed by treaties.

PLEASE READ: How Native students fought back against abuse and assimilation at US boarding schools

Here is a record from Carlisle: 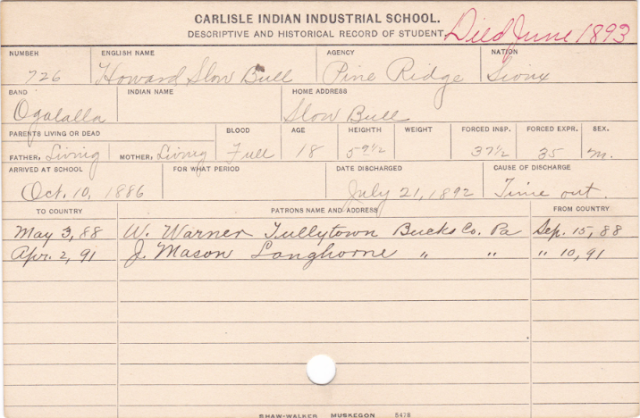 Notice: Howard Slow Bull (age 18) goes to the institution in 1886, is sent to farmers in PA in 1888 and dies in 1893 at age 25. These are the mysteries we still need to solve... so their souls can rest...   These were not schools but DEATH CAMPS and these children were hostages.... Blog Editor