Ghost Dance: A Symbol of Defiance 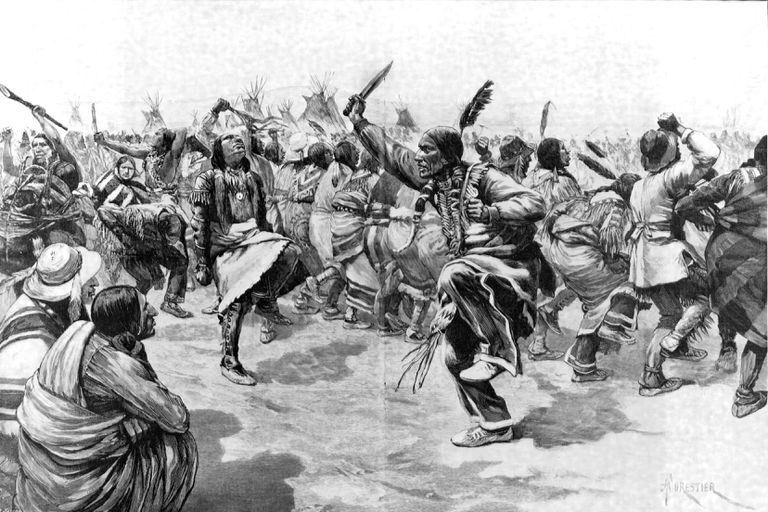 The ghost dance was a religious movement that swept across Native American populations in the West in the late 19th century. What started as a mystical ritual soon became something of a political movement and a symbol of Native American resistance to a way of life imposed by the U.S. government.

A Dark Moment in History

As the ghost dance spread through western Native American reservations, the federal government moved aggressively to stop the activity. The dancing and the religious teachings associated with it became issues of public concern widely reported in newspapers.
As the 1890s began, the emergence of the ghost dance movement was viewed by white Americans as a credible threat. The American public was, by that time, used to the idea that Native Americans had been pacified, moved onto reservations, and essentially converted to living in the style of white farmers or settlers.
The efforts to eliminate the practice of ghost dancing on reservations led to heightened tensions which had profound effects. The legendary Sitting Bull was murdered in a violent altercation sparked by the crackdown on ghost dancing. Two weeks later, the confrontations prompted by the ghost dance crackdown led to the infamous Wounded Knee Massacre.
The horrific bloodshed at Wounded Knee marked the end of the Plains Indian Wars. The ghost dance movement was effectively ended, though it continued as a religious ritual in some places well into the 20th century. The ghost dance took a place at the end of a long chapter in American history, as it seemed to mark the end of Native American resistance to white rule.

The Mormons and the Ghost Dance of 1890
GREGORY E. SMOAK
On 6 November 1890, Maj. Gen. Nelson A. Miles passed through Saint Paul, Minnesota, after a tour of Indian reservations in Utah, Montana, and Wyoming. During his stop in Saint Paul, the general spoke with reporters and speculated on the origins of the so-called messiah craze that was sweeping the western reservations. "Several small parties of Indians have gone west-ward from their tribes to some point," Miles began, "which, as near as I can locate, is in Nevada, and there they have been shown somebody disguised as the Messiah and have spoken with him." Since Indians from several different tribes had reported speaking with the "Messiah" in their own tongues, Miles concluded that a number of conspirators carried out the impersonation. As to who was instigating the movement, the general stated, "I cannot say positively, but it is my belief the Mormons are the prime movers in all this. I do not think it will lead to an outbreak," he added, "but where an ignorant race of people become religious fanatics it is hard to tell just what they will do."' The general's opinion proved to be wrong. In less than two months, the "Sioux Outbreak of 1890" led to the infamous Battle of Wounded Knee on 29 December 1890. Miles, in fact, directed the Sioux campaign and had sent the first troops to the reservation.
Quoted in "Probably a Mormon Trick," New York Times, 8 Nov. 1890. p. 5.
Mormons and the Ghost Dance