Indigenous people and supporters gathered on a windy, rainy cold day at Plymouth, Mass., on Nov. 28 for the 50th National Day of Mourning.

The undaunted crowd included Indigenous peoples of the nations the Pilgrims menaced and murdered — Mashpee and Aquinnah and other bands of the Wampanoag, Massachusett, Narragansett, Nipmuc, Pequot, and other Native Nations from the immediate region, and Native peoples from across Great Turtle Island and the Land of the Condor — in a vibrant show of Indigenous resilience despite the genocide begun by those colonial settlers. 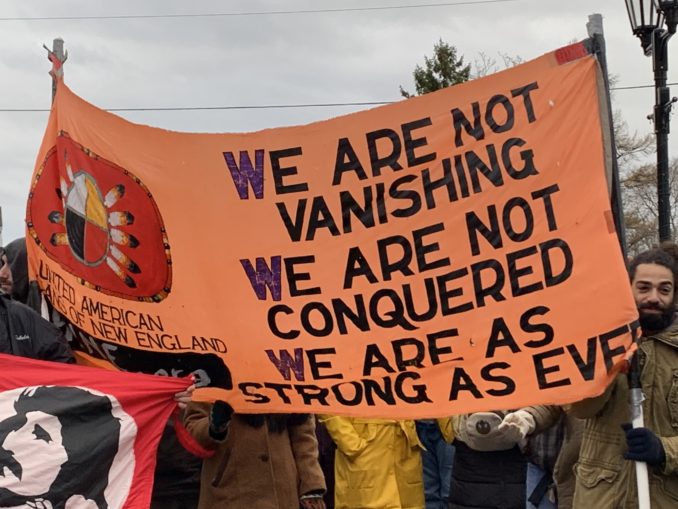 The banner of the United American Indians of New England, Nov. 28, Plymouth, Mass.

Moonanum James, Wampanoag, co-leader of United American Indians of New England, opened the rally on Cole’s Hill: “The first National Day of Mourning was held in 1970 in response to the refusal to let an Aquinnah Wampanoag man, Wamsutta Frank James, speak the truth at a fancy Commonwealth of Massachusetts banquet celebrating the 350th anniversary of the landing of the Pilgrims. Wamsutta and hundreds of Indigenous people and supporters gathered in Plymouth and observed the first National Day of Mourning, which UAINE has continued every year since.”
James said, “Over the years we repeatedly disrupted the ‘Pilgrims’ Progress’ parade, a tradition we continued until 1996. In 1997 we were blocked … and arrested for simply trying to march. The resulting defense of the Plymouth 25 led to the plaque you see over here on Cole’s Hill and the Metacom plaque we will visit when we march.” The English settlers killed the historic Wampanoag leader Metacom, also known as King Philip, and displayed his head on a spike for 25 years.
James pointed out: “The Pilgrims are glorified and mythologized because the circumstances of the first English colony in North America, Jamestown, were too ugly to hold up as an effective national myth.” School children now learn about the African slaves kept at Jamestown, and those first white settlers there actually turned to cannibalism to survive.

James went on to take apart the official, untrue story of the Pilgrims seeking religious freedom, which they already had in the Netherlands. He noted they came as partners of a commercial venture, seeking profits —  “nothing more than a group of white men wanting to ensure they would get a return on their investments.”

The first actual thanksgiving dinner was proclaimed in 1637 by Governor Winthrop to celebrate the massacre at Mystic of hundreds of Pequot women, children and men by men from the Massachusetts colony. James recounted the words of Winthrop, who gloatingly described the Pequot people being run through with swords and burned alive.

James called for support for the Mashpee Wampanoags’ petition and pending legislation in their current battle against the U.S. Department of the Interior, which ruled that their nation should not be able to take their own ancestral territory into trust. This is a direct attack on the self-determination and sovereignty of all Native Nations throughout the country.

UAINE co-leader Mahtowin Munro spoke to those present: “We acknowledge the many struggles that you have carried with you today on your backs, from the many efforts to stop pipelines to protect the waters, to the ongoing work to free Puerto Rico from U.S. colonialism, to the attempted desecration of Mauna Kea by scientists who lack respect for Indigenous sacred places, and to occupied Palestine. Defending tribal sovereignty is as much an issue today as it was at the original National Day of Mourning in 1970.”

Both of the federally recognized tribes in Massachusetts, the Penobscot and the Aquinnah Wampanoag, have had their tribal sovereignty restricted and been denied the use of their own lands by settler governments. Massachusett, Nipmuc and others continue to fight for their sovereignty without recognition.

Munro spoke of attacks on Indigenous people from Bolivia to Brazil, Australia, Honduras, Chile and Nova Scotia, everywhere Indigenous people continue to struggle to protect their lands: “We are all united in our fight against settler colonialism. And we must remember that what happens to one of us, happens to all of us.”

Munro also raised the ongoing attack on the 1978 Indian Child Welfare Act. Before the ICWA was passed, about one-third of Indigenous children were removed from their families and adopted into white families. Right-wing forces want to return Native nations to that genocidal practice. And as Munro noted, over 70,000 children were detained and caged at the U.S. border this year alone, but “no one is illegal on stolen land!”

Munro gave details on the struggle around Missing and Murdered Indigenous Women, Girls and Two Spirits. Indigenous Nations are fighting against pipelines, fracking, mining and the “man camps,” which are connected to the murders of Indigenous women: “Attacking the Earth and attacking Indigenous people are intertwined, following centuries of murder of Native and African people by European invaders. Sixty percent of the world’s land animals have been wiped out since 1970. …
“Only by listening to Indigenous people and dismantling the capitalist system, which allows climate collapse to happen in the first place, will we be able to save the planet. Indigenous peoples have always been the caretakers of the lands, waters and the life there, despite the efforts of settler governments to stop us from doing so. ‘We are not vanishing. We are not conquered. We are as strong as ever.’”

Indigenous struggles against corporate and settler government assaults on clean water, air and lands were addressed by speakers from throughout the hemisphere, from the fight against the mega hydrodam that threatens Labrador and Newfoundland lands and homes to the recent attacks on Indigenous peoples of Brazil in the Amazon.

Many speakers spoke about Bolivia, where a U.S.-supported fascist coup forced the first Indigenous president, Evo Morales, from office following his popular election. Fascist elements have carried out attacks on and murders of Indigenous people, who are 65 percent to 70 percent of the Bolivian population.

The gathering marched to Plymouth’s formerly named Post Office Square to hear some words at the plaque commemorating the history of Metacom. This plaque and that on Cole’s Hill were won in the 1998 UAINE settlement on the dropping of the charges against the Plymouth 25, along with the right to march without a permit every year on National Day of Mourning and some small reparations for educational purposes.

Then marchers continued down to the pebble called “Plymouth Rock” for final words before adjourning for the post-rally potluck social 2 miles away at a Lutheran church. The ruling-class Mayflower Association had bought the former Unitarian church, where marchers usually gather, and forced UAINE out this year.

As James said to the crowd on Cole’s Hill, “We will continue to gather on this hill till corporations and the U.S. military stop polluting the Earth. Until we dismantle the brutal apparatus of mass incarceration. We will not stop until the oppression of our Two-Spirit siblings is a thing of the past.
When the homeless have homes. When children are no longer taken from their parents and locked in cages. When the Palestinians reclaim the homeland and the autonomy Israel has denied them for the past 70 years. When no person goes hungry or is left to die because they have little or no access to quality health care. When insulin is free. When union-busting is a thing of the past. Until then, the struggle will continue.”