The Gloves Come Off: Civil Rights Suit Filed as Adoption of Veronica Finalized

Before the adoption of Veronica Brown to Matt and Melanie Capobianco was finalized yesterday in a South Carolina courtroom, the Native American Rights Fund made good on its promised Civil Rights litigation, filing a complaint late Tuesday night in federal district court on behalf of the girl's right to due process in a “meaningful hearing” to determine her best interest. The courts in South Carolina failed to “take into account or require any inquiry” regarding Veronica's current circumstances before approving the transition plan provided by Matt and Melanie Capobianco of James Island.

Additionally, the suit (V.B. v. Daniel E. Martin, Family Court for the Ninth Judicial Circuit) declares that Veronica is a tribal member and remains an “Indian Child” under the Indian Child Welfare Act, and therefore she “possesses a federally protected right” to a best interest hearing under federal law.
Supported by dozens of tribes, civil rights and child welfare groups, adoption advocacy organizations, legal authorities and Native American groups, the complaint seeks federal jurisdiction over the case, as well as an injunction prohibiting South Carolina courts from further proceedings pending a full and “meaningful” best interest hearing.
Angel Smith, an Oklahoma attorney appointed by the Cherokee Nation to represent Veronica as a tribal member, filed the motion on the girl's behalf.
The Cherokee Nation reacted swiftly to the finalization of the adoption and transition plan in South Carolina.
“Today, a Family Court in South Carolina finalized the adoption of an almost 4-year-old Cherokee child who has been living with her unquestionably fit, loving, biological father and large extended family, for one year and seven months, half a continent away in Oklahoma and Cherokee Nation,” said Chrissi Nimmo, assistant attorney general for the Cherokee Nation. “This decision was made without a hearing to determine what is in Veronica’s current best interests and comes almost two years after the same Family Court found that Dusten Brown was a fit, loving parent and it would be in Veronica’s best interests to be placed with her father. Every parent in America should be terrified.
Dusten Brown is an honorable man and a good father. Cherokee Nation will continue to support Dusten, Veronica and the entire Brown family in their attempt to keep their family whole.”
Dusten Brown, who is currently in training with the National Guard, also issued the following statement:
“Our family is shocked and deeply saddened that the South Carolina Supreme Court has refused to allow Veronica's best interest to be considered. Even worse, that Court issued an order they acknowledge will cause my daughter to suffer harm. The Court gave its blessing to the transition plan offered by the Capobiancos that says upon transfer to them, Veronica will be 'fearful, scared, anxious, confused,'” said Brown.
“They say she will likely become quiet and withdrawn and may cry herself to sleep. That the transfer will cause 'grief' and 'loss' and she will feel 'rejected' by me and her family. They say it will leave her with many 'unanswered questions.' I will not voluntarily let my child go through that, no parent would. I am her father and it is my job to protect her. My family and I continue to pray that the justice system bring justice to Veronica.”

But legal experts acknowledged that the fight over custody of Veronica is not only not over, but has now moved into a whole new level of litigation. In spite of South Carolina's ruling yesterday, enforcement in Oklahoma courts will now be the focus of the case.
“Everything will now move to Washington County, Oklahoma, where Veronica now resides,” said a legal scholar who asked for anonymity because of the ongoing litigation. “But it will require a bit of time for any order to be domesticated in that state. You may have an order from South Carolina, but guess what? Veronica's not in South Carolina. She's been domiciled in Oklahoma for 19 months and there's no way a court in Oklahoma is going to approve enforcement of this order without a normal, legal checklist of things that would be required for any other child up that's been put up for adoption, not to mention a child who is a tribal member and is living with a biological parent.”
For example, the adoption was finalized without a current homestudy or psychological evaluation of any of the parties involved, which legal and child welfare experts say are standard operating procedures.
“It's called giving 'full faith and credit' to another state's order,” said the expert. “[The legal team] is going to go into court to argue that full faith and credit should not be given to the South Carolina order because the courts there did not follow the law. And Oklahoma, quite frankly, does not have to give full faith and credit if Veronica's constitutional right to due process has been denied.”
Additionally, observers say that because jurisdiction has been shifted to Oklahoma, the gloves have now come off in a state that was originally founded as “Indian Territory.” With nearly 40 tribes, including the Cherokee Nation, Oklahoma has the second largest American Indian population in the United States. And they have watched the events in Adoptive Couple unfold in South Carolina with growing alarm and disgust.
“How is it that Paul Clement, who wasn't even a party in this case, walks into the United States Supreme Court and insults every Indian tribe in the country by making this case about blood quantum and fiercely advocating for a 'best interest' hearing, only to have it shot down in South Carolina because the judges there think it's too hard?” asks one Tulsa lawyer who works exclusively in ICWA cases. “It simply boggles the mind that any court would callously disregard the most important party in this case: Veronica herself. The fight is definitely not over.”
Lori Alvino McGill, the attorney for birth mother Christy Maldonado, today dismissed the federal suit to stop the finalization of the adoption as a “publicity stunt,” as tribes across the country continue to unify in support of Veronica and the Indian Child Welfare Act.

Meanwhile, on Tuesday the Capobiancos filed their response to Dusten Brown's request to the U.S. Supreme Court that the South Carolina courts postpone finalization of the adoption until a best interest determination hearing could be held. Chief Justice John Roberts, an adoptive parent himself who sided with the majority against Brown, oversees emergency petitions for the Fourth Circuit Court of Appeals, which includes South Carolina.
Sources in Washington have pointed out that Alvino McGill's role in Adoptive Couple is more than that of a spokesperson for Christy Maldonado. As it turns out, Chief Justice Roberts and former solicitor general Ted Olson, both of whom sided with the Capobiancos, attended Ms. Alvino McGill's 2006 wedding to Matthew McGill who, coincidentally, was a clerk for John Roberts in the D.C. Circuit Court of Appeals. Therefore, given the cozy nature and small world influence in the Capitol's legal circles, observers say it was no surprise when Adoptive Couple v. Baby Girl was granted petition of certiorari in January.
“Dusten Brown never had a chance,” said the source. “His biggest sin was that he got on the wrong side of the billion dollar U.S. adoption industry and he was winning. [The Supreme Court] knew this when they took cert on this case, otherwise, why would they bother with a custody dispute that should have been nipped in the bud four years ago? And the sad part is that he's rehabilitated himself in every way in this case. He's gone to every length to keep his child, he's done everything asked of him. But it is a system that was stacked against him from the beginning. This is Worcester v. Georgia all over again.”
After the South Carolina court's ruling finalizing the adoption of his daughter, Dusten Brown made a direct plea to the Capobiancos.
“To Matt and Melanie Capobianco I want to say this: Please, for Veronica's sake, just stop. Stop, and ask yourself if you really believe this is best for her.” 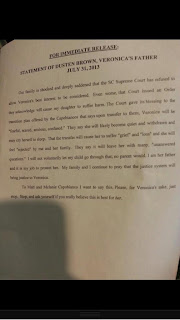