Sept. 4: A Cherokee tribal court will consider extending a temporary guardianship for Veronica's stepmother and grandparents, potentially claiming jurisdiction over the case.

Sept. 12: Brown to return to Sequoyah County Court for a hearing on his extradition.

Oklahoma Gov. Mary Fallin declined Tuesday to act on South Carolina’s extradition warrant for Dusten Brown until the birth father of Veronica has a chance to challenge the legality of his arrest for failing to turn her over to her adoptive parents on James Island.
Fallin said she had received Gov. Nikki Haley’s signed warrant seeking Brown’s extradition to South Carolina and had spoken to her counterpart in the Palmetto State. But Fallin said in a statement she has declined Haley’s request to sign the warrant until Brown has a chance to contest the action at a Sept. 12 court hearing in Sequoyah County, Okla.

“This is a difficult and sad situation for everyone involved, and Gov. Haley is working with law enforcement, the state of Oklahoma, and the family to resolve it as quickly as legally possible,” said Doug Mayer, Haley’s spokesman, by email in response. “Regardless of the varying personal opinions on this case, it is every governor’s first priority to uphold the rule of law and that is what must happen here. Both the U.S. and South Carolina Supreme Courts have spoken and the governor remains committed to returning baby Veronica back home safely.”
Brown is wanted in Charleston County on a custodial-interference charge for failing to surrender his 3-year-old daughter to Matt and Melanie Capobianco. He surrendered to Oklahoma authorities on Monday but was quickly released on a $10,000 bond. South Carolina authorities are now trying to get him back in custody and sent to South Carolina.
The Capobiancos, expressing frustration at the delay in reuniting with Veronica, vowed Monday to travel to Oklahoma and retrieve the little girl, whom they described as a “captive.” Word surfaced late Tuesday that they had indeed traveled to the Sooner State and planned to hold a press conference in Tulsa this morning.
A statement from Fallin’s office said she “believes that Mr. Brown should have the opportunity to argue his case in a court of law, and she will not act on the rendition order before that date. However, the governor encourages both the Capobianco family and Mr. Brown to reach a resolution outside of court as quickly as possible.”

The adoption industry's ugly side Op-Ed (from NCAI)

ON TWITTER: Krista Robertson @kdrobertson
is directly connected to Jessica Munday PR agent for the Capobiancos: 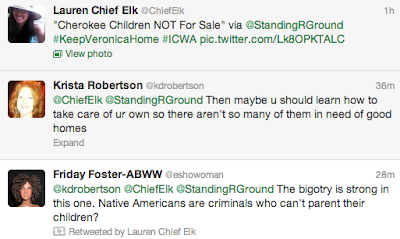