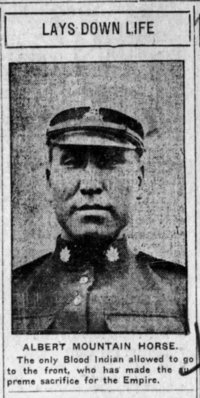 MOUNTAIN HORSE, ALBERT, soldier; b. 25 Dec. 1893 on the Blood Indian Reserve (Alta), son of Mountain Horse and Sikski; d. unmarried 19 Nov. 1915 at Quebec and was buried on the Blood reserve.

Albert Mountain Horse was born at sunrise and his mother, Sikski, knew that magic was connected with his birth. According to tribal custom, a medicine woman proclaimed his arrival and announced his name, Kukutosi-poota (Flying Star). She explained that many shooting stars had been visible during the night and that they were a portent. Sikski then dedicated her son to the Above-Person, believing that he had a spiritual mission in life.

As he grew older Albert became familiar with the various Blood societies, which encompassed every member of the tribe, and was soon initiated into one of them. He learned much about the old ways because his mother belonged to the Holy Women’s Society (Motokix) and his father to the powerful Horn Society. Although his father supported the Anglican St Paul’s mission near the reserve, Sikski took care to teach Albert the traditional beliefs of the Blood.

Educated at St Paul’s Boarding School, Albert was noted as being “one of the brightest and most enlightened boys on the Reserve.” His interest in army life began in boyhood, and he became a cadet in the corps that the Reverend Samuel Henry Middleton, principal of St Paul’s, organized in 1911. Cadet training was a first step into the military for native students at a number of residential schools. It gave them their best opportunity to recapture some of the “warrior” tradition of their forefathers. Middleton’s intention, however, was to teach his students cooperation and to reverse their natural individualism.

When Mountain Horse was old enough he was sent to a summer military training school in Calgary, where he passed the examination for a commission as lieutenant in the militia. At the outbreak of war in 1914, he was serving as a cadet instructor with the 23rd Alberta Rangers and was taking an instructor’s course in musketry in Calgary. He requested, and was granted, permission to volunteer for the Canadian Expeditionary Force, which he did in early September. Believed to be the first native recruit in Alberta, he enlisted at Valcartier, Que., on 23 September and joined No.4 Company of the Divisional Train, Army Service Corps, in which he would serve as a driver. He had enlisted as a private in order to be accepted sooner, and within a month he was sent overseas with the 10th Infantry Battalion. In a letter to Middleton he stated that he was “going forth to fight for my King and country.”

The war caused much confusion among the Blood. A generation earlier they had been instructed at the signing of Treaty No.7 to throw away their guns because the queen would protect them. When one of their own enlisted, in part because of Middleton’s encouragement, some saw the missionary as a betrayer who had broken the treaty by sending a Blood to fight abroad. Middleton was warned that, if anything befell Albert Mountain Horse, he would be considered responsible.

The letters Mountain Horse wrote while in the army convey a feeling of optimism and enthusiasm. “I do not think the Germans will stand any chance when we get over there,” he commented from England. “I am very anxious to get to the war.” He was soon embroiled in April 1915 in the second battle of Ypres. “I was in the thick of the fighting at Ypres,” he related, “and we had to get out of it. The Germans were using the poisonous gas on our men – oh it was awful – it is worse than anything I know of. I don’t mind rifle fire and the shells bursting around us, but this gas is the limit.” Mountain Horse came through the battle without serious injury, but he was gassed on two subsequent occasions and had to be hospitalized. Believing him convalescent, the army sent him back to Canada, but his lungs were so weakened that tuberculosis set in. He died on 19 Nov. 1915, only one day after landing at Quebec. William J. Dilworth, agent on the Blood reserve, subsequently questioned the enlistment of natives, not on ethical grounds, but because of “their tendency to develop consumption.” He supported his opinion by citing the case of Albert Mountain Horse. “He was only about three weeks in the trenches when gassed, and he developed tuberculosis at once, and since May was a care on hospitals. This young man was as strong a young fellow as there was on the reserve.”

The news of Mountain Horse’s death was totally unexpected on the Blood reserve, and caused great resentment among his friends and family, who believed that his life could have been saved had he been sent home earlier. His grieving mother attacked Middleton with a knife and might have killed him if another of her sons had not intervened. For weeks Sikski carne to Middleton’s house seeking vengeance. Her anger subsided only after she understood that Albert had chosen himself to go to war and had been prepared to die as a warrior. One of his letters had noted his reply to a doctor who proposed sending him to hospital: “I told him I would sooner die like a man in the trenches than have a grave dug for me.”

Archdeacon John William Tims conducted the war hero’s funeral. Many of the Blood followed the procession on horseback; a number of the older men started their war chants as the coffin approached. Middleton told his congregation that “one of the Empire’s greatest sons . . . having gained all the honours and respect which can be shown to a soldier and a man has cast a brilliant reflection on the Blood Indians of Alberta, proving to the world at large he was truly an Indian warrior.” Sadly, Sikski would die before she could receive Albert’s war medals, which went to a sister. After their brother’s death Joe and Mike Mountain Horse enlisted, no doubt to seek revenge. Joe was wounded in 1917 in the first engagement at Arras, France, and Mike in the second battle of Cambrai in 1918. Both recovered. In 1939 Mike would again enlist for overseas duty.