How much I changed (Part 2) #IndianProblem 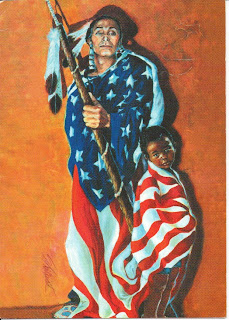 From 1830 to 1840, between 70,000 and 100,000 American Indians living in the East were forcibly resettled by the US Army. Many others were massacred before they could be persuaded to leave; an unknown number died from disease, exposure, and starvation suffered during the Trail of Tears as well as on other enforced, long-distance marches westward to Indian Territory.

While the removal policy helped to alleviate the immediate "Indian problem," as more and more Americans continued to move westward, they found other Indian tribes living in freedom throughout the continent. Because these Indians prevented non-Indians from settling in many desirable areas, and because many white settlers did not feel safe living amidst the Indian "danger," another new policy was created to deal with the Indians - they would be confined to a land reserved exclusively for their own use - areas that came to be called reservations.

By Trace A. DeMeyer (Trace Lara Hentz in the near future) PART 2

Child "protection" is one of the biggest businesses in the country. We spend $12 billion a year on it.

The people who are charged to look after abused and neglected children have an important job. I give them that. We all know some states have very high rates of poverty.  Most of those states have Indian reservations and based on statistics, most Native children in foster care live in those states. Foster care doesn't solve the poverty problem by taking children away from their parents! It feeds the system that makes money on children in state care. The amount of money spent on social worker salaries and all the other state jobs: billions per year. Read more HERE about Massachusetts, where I live.

Are these social workers and judges aware of this country's appalling Indian history? Maybe, some.

Children on some reservations do experience poverty.  The US government who created these reservations (some say concentration camps) know this, too.  [On this blog, we have covered how this is affecting many Indian families, when their children are taken away. We have also covered in depth what this does to the child who is adopted out or goes through the foster care system.]

We know "their" job as social workers is to make sure all children are safe.  When you have poverty, you have increased rates of all the bad things: not enough food, depression, crime, etc. It's a vicious cycle that sucks in new generations. I have been to enough reservations to know this first hand.


Has the government made life better for Indian people since the Indian Child Welfare was passed in 1978?  No.  The federal government is too busy dealing with all the other problems it creates. The Department of the Interior's Bureau of Indian Affairs has been making life miserable for all the tribes since the late 1700s... Back in those days "overseers" and Indian Agents (up until the 1970s) were just like the social workers of today. They removed children from their parents, citing "poverty." Who created this poverty?


I remember the Eastern Pequot tribal leaders told me they were "handled" by the Connecticut Dept. of Parks and Forests. Some of the overseers reports were kept in the CT state archives. If you wanted to buy medicine or cloth or anything, you had to ask the overseer.  I was told the Eastern Pequots would return home from work and their children would be gone (and they never saw them again.)  With all the dirty politics in that state, this tribe documented their entire history, only to be denied federal recognition! READ

If you read tribal newspapers, tribes have been fighting "states" over their treaty rights and the care of their own children ever since treaties - yet this was never supposed to happen!

The Indian Child Welfare Act of 1978 was instituted and passed to protect tribal children from state's social workers and other groups (missionaries and organized religions) who steadily removed children.  If you read the anthology TWO WORLDS, you will read testimony that was presented to the Senate about this horrific chapter of American history.

What changed my life was finding out the US government condoned and funded the Indian Adoption Projects, affecting thousands of Indian children who were adopted out to non-Indian parents for the sole purpose of erasing our identity and terminating our rights as sovereign citizens in our tribes.

It seems we still have an Indian Problem.