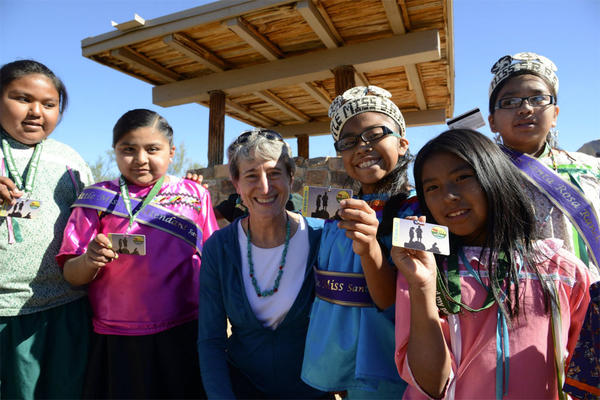 A day after tribal leaders and governors in all 50 states received a letter from the Bureau of Indian Affairs, U.S. Interior Secretary Sally Jewell paid a visit to the Spokane Indian Tribe.
Jewell said Thursday, changes under the Indian Child Welfare Act, or ICWA, close some long-standing loopholes in the law.
During her visit, Jewell said a disproportionate number of tribal youth are being placed in the non-tribal foster care system “without any credible effort being made by the states to place those children in a family structure and a community structure that honors their heritage and their culture.”
The new rules require state courts to ask all participants at the beginning of custody proceedings about a child’s heritage. As well, only tribes can determine if a child is Indian.
A spokeswoman from the National Indian Child Welfare Association said no organizations or agencies at the state or federal level track the number of kids placed under ICWA. The group’s most recent estimates say one-third of the Northwest’s native population was under the age of 19.
High ranking government officials don’t come to Wellpinit, Washington, often. Jason Campbell, CEO of Sovereign Power, the Spokane Indian Tribe’s energy company, aid tribal leaders usually have to go to Washington, D.C., for this kind of conversation.
The Spokane Tribe is a sovereign nation and you could say Wellpinit is the capital. There’s a clinic, a public safety building and the cars even have their own black and green license plates.
Campbell was among leaders who offered Jewell a tour. They discussed many needs as an excited group of women gathered nearby.
“The Spokane Tribe is being recognized and it’s about time. We need this,” said Nancy Raymond, who has lived on the Spokane Indian Reservation her whole life.
Wellpinit resident Clarissa Thatcher added, “There’s a long list of stuff that can be improved on here.”
The tribe was selected to participate in a federal initiative meant to boost economic prosperity. Secretary Jewell said that effort will continue despite the outgoing Obama administration.
“That doesn’t matter,” Jewell said. “It’s the programs and the structure and the career staff that facilitates moving this forward.”
Two federal staff members will be dedicated to helping the tribe with long term projects.

****
The Indian Child Welfare Act descends from a history of human rights abuses of Native Americans and subjugation of their culture, as the Christian Science Monitor's Bamzi Banchir explained in March:


The act was passed to amend historical practices that saw native American children taken from their families and communities and placed in boarding schools in an attempt to 'solve the Indian Problem' – native Americans were depicted as 'savage heathens' – by assimilating them into mainstream American society....


***
AND from the Christian group who is seeking to destroy ICWA: [Christian Newswire 2016. All Rights Reserved. | 2020 Pennsylvania Ave. NW - Washington - DC - 20006 | 202-546-0054] Elizabeth Morris is Chair of the Christian Alliance for Indian Child Welfare and author of "Dying in Indian Country." CAICW, a ministry and advocacy, has assisted families judicially, educationally, and as a prayer resource since 2004.
If you thought Elizabeth Morris is gone after the Baby V case, she's not. Look at this

***
NARF statement about frivolous lawsuits: Since our founding 45 years ago, NARF has worked to protect the rights of Native children, families, and communities. We stand hand in hand with our allies against these recent attacks on ICWA and we will fight these meritless lawsuits.