Mary Mahler and two of her brothers were adopted by a family in Pennsylvania. (CBC) 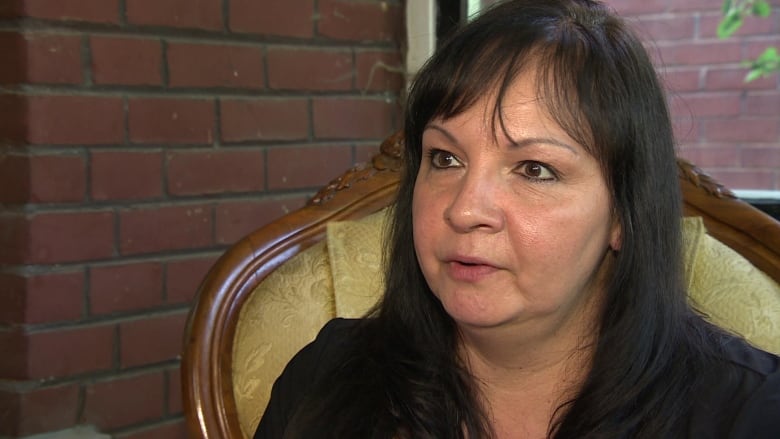 The tears take over when Mary Mahler talks about the loss of culture, language, family and identity she suffered as part of what's referred to as the Sixties Scoop, which saw her taken from Winnipeg and put into a home in the U.S.
The Manitoba government has said it plans to apologize to the people caught up in scoop, but Mahler says the apology must come with understanding.
"How can you apologize when you don't know what you are apologizing for?" she said. "So how can that be an apology when you don't know my story [or] the thousands of other stories and the horrible things?"

Mahler says a true apology can only come when those victims of the scoop have an opportunity to tell their stories.

Thousands of indigenous children were taken from their families from the 1960s through the '80s and placed in non-indigenous homes.

Mahler and her seven siblings' odyssey began in Winnipeg with placement in a foster family.

"I'm seven years old and I don't understand what was happening, and my brother was being tortured with a belt around his neck and they were abusing him," Mahler said about one of the many foster homes she was placed in after being taken from her family.

She and two brothers were eventually sent to a family in Pennsylvania when Mahler was thirteen years old. She remembers how she felt when the plane landed in the United States.

"I realized that I would never ever see anybody — any of my friends. I didn't get to say goodbye," Mahler said.

The three children lived with two different families during their time in the U.S. She says her brothers were subject to racist comments by locals because they were "visibly aboriginal."
"They were called 'spics,' Mahler recalls. "They weren't called indians, but all kinds of other [racist] names."
Mahler says the family they ended staying with for years lived in a rural part of Pennsylvania and though it was better than some of the foster homes in Winnipeg, it was a "walled-in kind of life."
Her foster parents were very strict and religious. Sports weren't allowed and Mahler says she had few friends.
"They were so controlling about food and what we would eat and liked to control every aspect of our lives."
Mahler recalls an incident where some walnuts from the family's pantry appeared to have gone missing and she watched as one of her brothers was punished with a piece of wood taken from the woodpile.
"And why? Because you are hungry? Because you want something to eat?"

The family would end up moving to a rural area in New York state. When she turned 18, Mahler lived with some nuns involved with a charismatic Catholic sect the family followed. Eventually Mahler would leave the nuns, and over the course of several years, marry, get divorced and re-marry.
She was never allowed to have U.S. citizenship and even lost custody of two children she had with her first husband.
Eventually, Mahler returned to Manitoba and now lives in Winnipeg once again. But she lost track of one of her brothers and a sister. One of the brothers she lived with in the U.S. went to prison and remains there today.
Mahler says in order for an apology by any government to work, the stories of what happened to children who were "scooped" has to be told, and she believes there should be money available to help those people rebuild their families.
Families she says were torn apart by the adoption scheme.
"I am trying to find money to find my brother; money to find my sister. Money to help my brother in prison."
Mahler considers herself lucky — she has been able to stay in touch with most of her family.
"There are others who haven't been able to be strong and keep their families together and stay connected."
The apology from the Manitoba government is expected in June 2016.