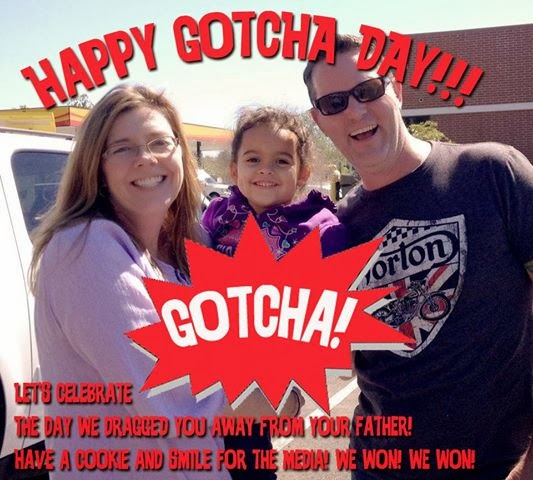 Remember this photo? In the big world out there, few people even knew about the Indian Child Welfare Act until Baby Veronica was adopted out... Then headlines were screaming for months. Indian Country responded and fought back using the federal law but even that wasn't enough to allow a Cherokee father to keep and raise his own daughter.

I have wanted to say something about the RadioLab program/podcast about Baby Veronica and the Supreme Court Case. This was a few years ago and rebroadcast a few days ago.
More Perfect presents: Adoptive Couple v. Baby Girl
I spoke with the interviewer. He didn't use one word of my story in his RadioLab report. I have no clue why not. I did give him names of other adoptees he could speak to... He spoke to many many people and quoted them but not one adoptee!  I recall I told him I was Baby Veronica just 50 years later.  My dad would have raised me. There was no Indian Child Welfare Act when I was adopted by strangers. I was traumatized. I was not going to stop looking for my family, even if my records were sealed in Wisconsin and Minnesota. I was one of thousands who lost their family connections and tribal connections. I didn't want Veronica to go through what I did.  Our culture matters and adoption steals years of our lives.

These Goldwater and RadioLab people didn't and don't want to hear me, or adoptees (young or old). They simply don't. Their bias is blaring. (It's been drilled into their minds how adoption is always good and saving poor kids.)

I wrote an essay in 2013 about this case and submitted it to the Atlantic editors but they didn't publish it. WHY? I didn't get a reason but it's clear...they don't consider Indians and adoptees interesting enough or news-worthy, let alone a federal law concerning Indians.

Finally (with utter frustration) I sent it to Indian Country Today Media in New York. They published it.

I’m a “lost bird," one of thousands of Native children adopted-out of tribal communities from the late 1950s to late 1960s as part of a federal program called the Indian Adoption Projects. The Project came after the decades long boarding school era when government and missionary schools aimed to “kill the Indian to save the child.”

Read more at https://indiancountrytodaymedianetwork.com/2013/08/12/baby-veronica-case-david-vs-goliath
Is that fair reporting and analysis if "THEY" (the mainstream radio, TV, newspaper media) don't consider WHY there is an ICWA?  Have they considered Baby V will grow up and not be a child anymore and imagine her loss of family and culture?  Who better to ask than an adoptee who has lived through it?

Why are they ignoring the ADOPTEE STORY in this story?

In San Diego a few weeks ago, Diane Tells His Name, Leland Kirk, Karen Vigneault, Tom Lidot (Tribal Star) and I had breakfast and we discussed this. (We were together, presenting at the California State ICWA Conference on June 7, 2016.)


"...There is an ICWA because of us, all the American Indian Adoptees, Lost Birds, Stolen Children, 60s Scoop, and Indian Adoption Project adoptees. WE are the reason there is a law. We are still called the Stolen Generations. We are the second phase of atrocities committed against Indian People before during and after the boarding schools. (WE were supposed to permanently disappear in closed adoptions with sealed records, living "happily ever after" with our white parents.) There is a federal law ICWA because of us, because adoption trafficking in Native babies and children was clearly genocide. With ICWA, there will be many less adoptees... We get that; in Indian Country we know this."


.@Sherman_Alexie We thought you should know ur quote opens this viciously anti-ICWA article by Goldwater https://t.co/mVKJhMAZYm #DefendICWA
— NICWA (@NativeChildren) June 20, 2016

“And finally this, when the sun was falling down so beautiful we didn’t have time to give it a name, she held the child born of white mother and red father and said, ‘Both sides of this baby are beautiful.’”
—Sherman Alexie

The ICWA Penalty Box: In Defense of Equal Protection for Indian Children By Timothy Sandefur (Goldwater Institute) used this quote.