Justice Murray Sinclair, the chair of the Truth and Reconciliation Commission, says today (Dec. 15) marks the beginning of a new chapter in relations between indigenous and non-indigenous Canadians.

"I stand before you here, hopeful that we are at a threshold of a new era in this country, said Sinclair to an emotionally charged room filled with many residential school survivors and their families, moments before he unveiled the commission's final report in Ottawa.
The final report is a detailed account, spanning nearly 4,000 pages, of what happened to indigenous children who were physically and sexually abused in government boarding schools.
Two chairs at the front of the room were left empty to symbolize the more than 3,200 indigenous children who died in residential schools — a number Sinclair estimates to be much higher.


Sinclair along with commissioners chief Wilton Littlechild and Marie Wilson, spent the past six years hearing heartbreaking testimony from more than 6,000 residential school survivors who were abused and lived to tell their stories.

"Each and every one of us who listened to them would go home at the end of each day," Sinclair said, his voice choked with emotion, "and we would hold our children, our grandchildren, closer as we proceeded.

"Not so much to protect them from some invisible force, but to gain the strength that we would need each day to go forth and to listen once again."
Sinclair, Manitoba's first Aboriginal judge, spoke of the impact the commission's work had on his health and his family.

"I have a wife and a family, who need me, and whose love and support have carried me to this point. They have supported me in this work but at great loss to the relationships we could have had and which we will now try to recapture," said a visibly moved Sinclair.


While the release of the final report marks the end of the commission's mandate, Sinclair said it also turns the page on a new chapter in reconciliation between indigenous and non-indigenous people.

"A period of change is beginning," said Sinclair, "that if sustained by the will of the people, will forever realign the shared history of indigenous and non-indigenous peoples in Canada."

"Change, of course, will not be immediate. It will take years, perhaps generations."

Commissioner Wilson, a former journalist who worked at CBC for 25 years, spoke of the commission's efforts to record the deaths of the thousands of children who died in residential schools.


'It is the survivors' telling of their stolen childhoods that has shaken us all awake' - Marie Wilson, commissioner

Wilson spoke of the "Missing Children and Unmarked Burials Project" which found that many government and school officials did not record the names, gender or cause of death of indigenous students.

"Much work lies ahead on the path to reconciliation including the reclamation of your names and the reconsecration of your resting places."

Turning to Trudeau, Wilson said, "in the absence of any direct involvement by the previous prime minister in any of our Truth and Reconciliation hearings or national events, today will mark the first time that we hear an official response to our work from the prime minister of Canada on behalf of all the people of Canada."

Wilson's remarks were met with loud cheers and thunderous applause as the crowd gave Trudeau a standing ovation.

Sitting in the front row, Trudeau was seen wiping away his tears.

Wilson concluded her remarks by thanking the survivors who pushed to have their voices heard.
"It is the survivors' telling of their stolen childhoods that has shaken us all awake," she said.

Trudeau remained seated at the front of the room where he went on to listen to the pleas for reconciliation from a number of residential school survivors until it was his turn to speak.

"John highlighted something for me," Trudeau said of the survivor who had just spoken before him. "I went to some very good schools as a child and throughout this experience I can only — feel guilty, but at least very aware of the contrast between my schooling and the experiences some others went through."

John Banksland is an Inuvialuit elder who spent 15 years as a resident of the Immaculate Conception Residential School in Aklavik, NWT. 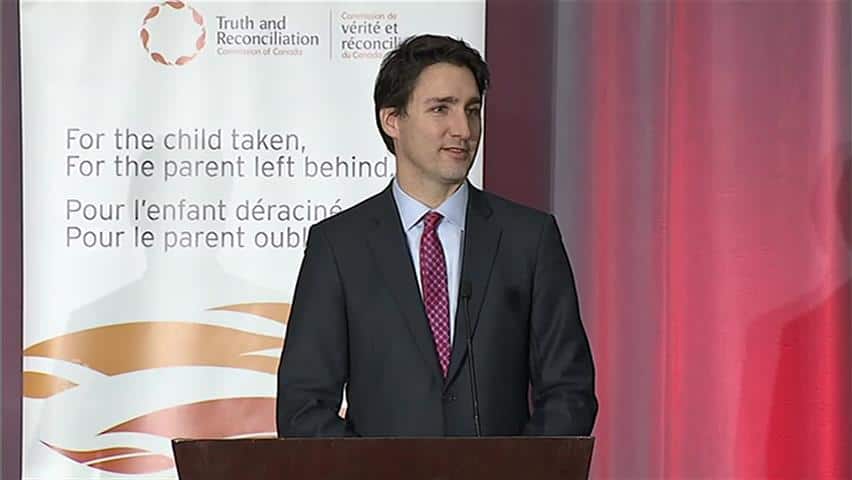 Trudeau on the promise made with the TRC

Trudeau was conciliatory in his remarks, giving a nod to Stephen Harper's Conservatives for the 2008 apology to residential school survivors.

"The previous government expressed this so well when it said in its formal apology that your courage 'is a testament to your resilience as individuals and to the strength of your cultures... the burden of this experience has been on your shoulders for far too long. The burden is properly ours as a government, and as a country.'"

"Our goal, as we move forward toward together, is clear," Trudeau said. "It is to lift this burden from your shoulders, from those of your families and communities.  It is to accept fully our responsibilities  and our failings, as a government and as a country," the prime minister said to loud applause.

"Seven years later, the apology is no less true, and no less timely."

Trudeau apologized to indigenous people on behalf of the Canadian government quoting directly from the 2008 residential schools apology.

"The government of Canada sincerely apologizes, and asks the forgiveness of the Aboriginal peoples of this country for failing them so profoundly," said Trudeau.

The prime minister, who has committed to implementing all 94 calls to action, said a more "formal response" would be forthcoming in an effort to renew the federal government's relationship with Canada's indigenous people.

"Let me say once again: I give you my word that we will renew and respect that relationship."
"We will remember that reconciliation is not an Aboriginal issue, it is a Canadian issue," he said.

Reconciliation has 'no finish line'

Littlechild, who spent over a decade in residential schools in Alberta, went on to work as a lawyer and served as a member of Parliament from 1988 to 1993.

In his remarks, Littlechild said reconciliation was a "non-partisan" responsibility and "great national opportunity."

Littlechild, who described himself as a "lifelong competitive athlete" said that sports allowed him to escape the pain and suffering of residential schools.

"We need to work together as a team, as a country, in living up to the principles of reconciliation."
"I think we are off to a very strong start," the former coach said.
"I hope there will be no finish line for reconciliation." 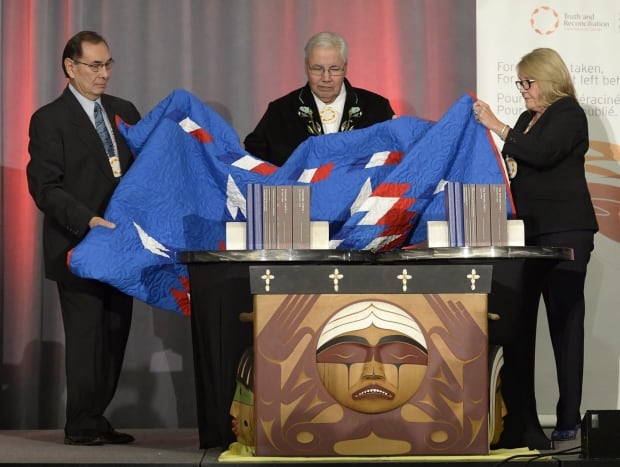 Justice Murray Sinclair, centre, and Commissioners Chief Wilton Littlechild, left, and Marie Wilson pull back a blanket to unveil the Final Report of the Truth and Reconciliation Commission of Canada on the history of Canada's residential school system. (Adrian Wyld/Canadian Press)

The final report of the Truth and Reconciliation Commission is being published in seven languages: English, French, Mi'kmaq, Ojibwa, Inuktitut, Cree and Dené.

The commission was established on June 1, 2008, as part of the court-approved Indian Residential Schools Settlement Agreement with the mandate to inform all Canadians of what really happened to indigenous children in residential schools.

Trudeau will meet for the first time on Wednesday with the leaders of five national aboriginal organizations.

(Note: CBC does not endorse and is not responsible for the content of external links.)