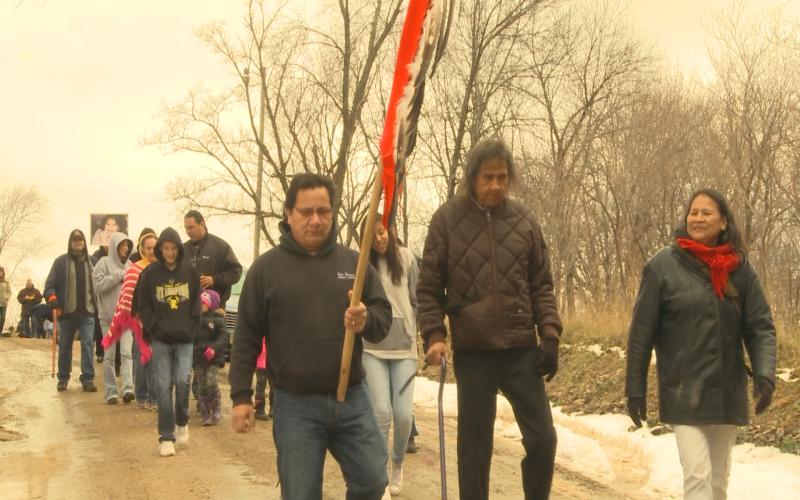 SIOUX CITY, Iowa (KTIV) -
For 13 years, a walk through the streets of Siouxland has brought together the community to honor a special group of people.
"The March To Honor Lost Children" recognizes Native American children and other children tribal members say have been lost to foster care and adoption.
There are three children who have been honored throughout the years who died under foster care.
Larissa Star and Hannah Thomas died about 15 years ago.
Nathaniel Saunsoci was a 20-month-old who died in 2006.
He sustained severe head injuries while living in a foster home in South Sioux City.
Wednesday, was a day of remembering those three children and others in the foster care and adoption system.
The morning began with a prayer of hope for a group of people looking to bring awareness about the issue of Native American children who are "lost" in the adoption or foster care system.
"Somebody is going to see this today, a child is going to look at this, a child who feels abandoned and isolated and they're going to see this group. And it's going to make them feel good," said Frank LaMere, organizer of the March to Honor Lost Children.
LaMere has organized the event since the beginning and he says some children who aren't with their biological families will see this and hopefully reconnect with them.
One family hoping to reconnect with their loved one through the march was Delphine O'Connor and her son Michael.
Delphine says her granddaughter Maria Helena Flores was taken into foster care nearly 20 years ago.
She says during that time, an injury caused Maria to become quadriplegic.
"I would consider her lost as one of the lost children and in our family since we don't have that contact with her and I relate to that to a lot of our families out there right now," said Michael O'Connor, a member of the Yankton Sioux Tribe.
Maria's story was just one of many shared by the marchers Wednesday morning.
Organizers say this wasn't only a day to remember those who are lost, but also for future generations.
"There's still disproportionate numbers of our children in foster care," said LaMere. "Disproportionate numbers of our children are being adopted. And I think that we need to be vigilant, elevate the discussion."
For the marchers, spreading that message is just one step in their efforts to make change.
There were multiple stops for the marchers along their route Wednesday.
Two of them included the Siouxland Center for Active Generations and the Woodbury County Courthouse.
There were prayers for the children at each stop.
The cold weather did not prevent people from out-of-town from coming to support the cause.
There were people who traveled from Oklahoma City, Des Moines and other areas outside Siouxland to raise awareness.
One man came from Omaha to be a part of the march.
"I feel like people look over this like people look over this a lot," said Peter Janda, an Omaha, Nebraska resident. "I mean it's kinda sad to see what's happening and seeing what's happening to these children and I think that people should take a stand."
Janda says the march signifies so much more than just going on a walk and that it was important for him to participate.