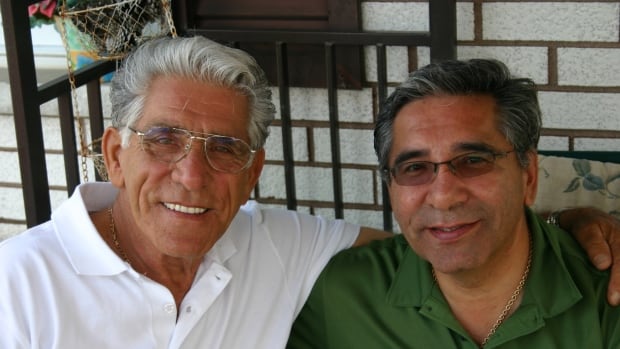 It took 53 years for Abel Bosum, right, to find his birth father, Cyprien Caron (left). (Abel Bosum)
​Abel Bosum grew up with a Dad-sized hole in his life.
He remembers being a boy who envied his friends when they talked about their dads — going hunting or fishing with their fathers, even doing ordinary things.
Abel pretended to not care. But in truth, he cared a lot.
The story of  Abel Bosum starts with a clash of cultures and language. In the 1950s, a young Cree woman named Lucy Busom lived in a settlement near Chibougamau, Que. She met and fell in love with a French-Canadian who hailed from Quebec City, more than 500 kilometres away. They wanted to marry, but her parents refused.
Instead, following tradition, the elders arranged a marriage between Lucy and Sam Neepoosh.
No one talked much about Abel's biological father, so he grew up full of questions and feelings, but not even certain of the name of the man he missed. And that's how it remained — for 53 years.
It's not that Abel didn't have a father. He did; Sam adopted and raised Lucy's son, and Abel will always be grateful for that. Still, even a kind, adoptive parent couldn't fill the void where Abel pictured a "real dad."

Then on a lovely summer day in 2008, the spectre of his father reappeared and shook Abel's life to the core.
By this time, Abel was was married with children and grandchildren.
A family friend reported seeing Abel's missing father in a shopping mall. That led to an intense search for a man whose name no one remembered.
Abel spoke to all the elders and, bit by bit, pieced together enough information for a computer search.
His dad's name: Cypien Caron.
Try to imagine Abel at this point: He was 53 years old, a successful Cree negotiator who has his own consulting firm. He was sitting in his car in front of a suburban home, "stalking" a man he thought might be his father.
"These were very unsettling moments," said Abel.
"[It] made me feel like a young boy again. I was experiencing strange feelings that I had never had before, and I was in turmoil. I did not know how to react, I did not know what I would say, and I certainly did not know what I would do when I met him. "
On Aug. 19, 2008, father and son finally met in Saint-Joseph-du-Lac, Que.
After years of wondering what that moment would be like, Abel describes it like this: "He reached out to me, hugged me and whispered, 'My son, I am so happy. I love you!'"
It is the fantasy of many adopted children. For Abel it was a reality — Cypien Caron was happy to connect with the child he was never allowed to father.
For the next six years, father and son spent a lot of time doing the things dads and boys might do — hunting and fishing. Abel's family was suddenly included in much larger family reunions.
Six years is a long time in some ways. It was far too short a time for Abel when he learned Caron was mortally ill. He was, however, able to spend the last days of his dad's life at his bedside, with enough time to both of them to say everything that was in their hearts.
When his dad died, Abel wrote, “Cyprien, it broke my heart to lose you but you did not go alone, a part of me went with you the day God took you home. In life I love you dad, and in death I love you still, in my heart you will hold a place no one could ever fill!”
Abel Bosum is currently writing a book about Cyprien Caron and the way their lives connected. It will be published in the near future.