Adoption failure? Sure, it's called rehoming

By Trace A. DeMeyer
Until the world catches on to the corrupt world of “human trafficking” (purposefully called adoption) and now the re-trafficking (rehoming) of adoptees, Until criminal charges are filed on the agencies and these parents, these adopted children are the victims of the unscrupulous and criminal “dark side” of adoption trafficking. The chances these re-homed children will be abused in some way, is obvious to me. 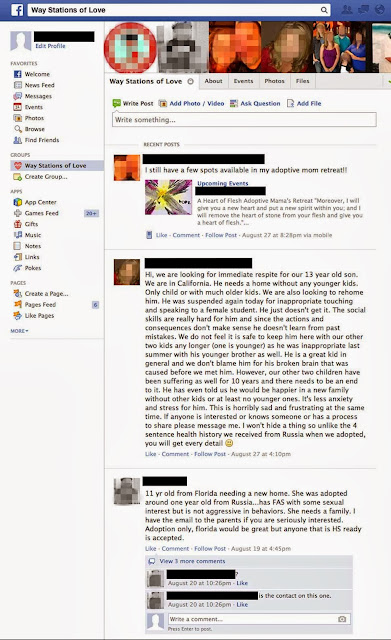 Parents Use Facebook and Yahoo to Unload Adopted Kids Online

According to Reuters, over the course of five years a Yahoo message board called Adopting-from-Disruption (failed adoptions are sometimes referred to as "disrupted") featured an new ad for a child about once a week. At least 70 percent of kids advertised there had been adopted from overseas, including countries such as Russia, China, Ethiopia and the Ukraine. Most ranged from ages 6 to 14.
Read here: http://gawker.com/how-parents-use-facebook-and-yahoo-groups-to-sell-adopt-1278659585