This is the story of a three-year-old girl and the highest court in the land. The Supreme Court case Adoptive Couple v. Baby Girl is a legal battle that has entangled a biological father, a heart-broken couple, and the tragic history of Native American children taken from their families.
When producer Tim Howard first read about this case, it struck him as a sad but seemingly straightforward custody dispute. But, as he started talking to lawyers and historians and the families involved in the case, it became clear that it was much more than that. Because Adoptive Couple v. Baby Girl challenges parts of the 1978 Indian Child Welfare Act, this case puts one little girl at the center of a storm of legal intricacies, Native American tribal culture, and heart-wrenching personal stakes.

Background and Reporting from a range of different perspectives

"Couple forced to give up daughter"
An introductory article by Allyson Bird, for the Charleston, SC Post and Courier
Comprehensive coverage of the case by the Charleston Post and Courier
"Supreme Court Takes on Indian Child Welfare Act in Baby Veronica Case"
A report for Indian Country Today by Suzette Brewer, who has also written a two-part series on the case.
"Supreme Court hears Indian child custody case"
Tulsa World article by Michael Overall which includes Dusten Brown's account of his break-up with Veronica's mother, and his understanding about his custodial rights. Plus photos of Dusten, Veronica, and Dusten's wife Robin in their Oklahoma home.
Randi Kaye's report for CNN on the background of the case, and interviews with Melanie and Matt Capobianco: "Video: Adoption custody battle for Veronica"


Americans remain dangerously uninformed about the basics of tribal sovereignty, and what it means for the relationship between the United States and Native tribes and nations.

The Weekly Standard's Ethan Epstein argues that ICWA is "being used to tear [families] apart]: "Mistreating Native American Children"
Andrew Cohen considers the trickier legal aspects of the case for the Atlantic in "Indian Affairs, Adoption, and Race: The Baby Veronica Case Comes to Washington:"


A little girl is at the heart of a big case at the Supreme Court next week, a racially-tinged fight over Native American rights and state custody laws.

Marcia Zug's breakdown of the case (Marica Zug is an associate professor of law at the University of South Carolina School of Law who she specializes in family and American Indian law) "Doing What’s Best for the Tribe" for Slate:


Two-year-old “Baby Veronica” was ripped from the only home she’s known. The court made the right decision.

Adoptive Couple v. Baby Girl on the SCOTUS (Supreme Court of the United States) Blog
Audio from the oral arguments in the Supreme Court

The First Nations Repatriation Institute, which works with and does advocacy for adoptees

I will be posting about this case ...Very disappointed that AN ADOPTEE PERSPECTIVE was not a part of this RADIO LAB discussion. Adrian Grey Buffalo, Patricia Busbee and I were interviewed by Tim Howard but apparently we didn't make the final cut... Trace 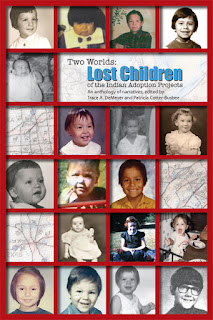