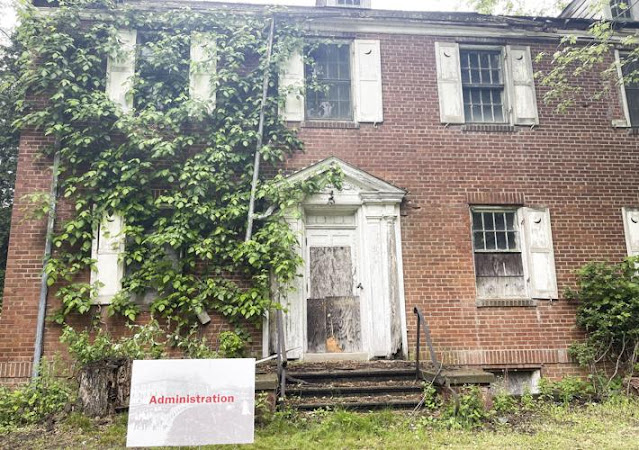 MOUNT PLEASANT — Children ran along the grounds, playing on the former grounds of the Mount Pleasant Indian Industrial Boarding School.

Long braided hair, ribbon skirts, and the practice of Anishinaabek ceremony such as smudging would have not been allowed 88 years ago.

On the anniversary of the institution’s closure, more than 100 community members gathered to recognize the suffering, strength and resilience of the children through a day of memoriam and fellowship.

The Mount Pleasant Indian Industrial Boarding School operated for more than four decades starting in 1893, before its closure on June 6, 1934.

Now, seven crumbling buildings are all that physically remain of the institution which once kept thousands of Native American children.

Despite boarded windows and deteriorating brick, the structures remain standing, to give testimony of the legacy of the boarding schools felt deeply across Indian Country throughout generations.

Eleven-year old Harmony Wethington, a citizen of the Nottawaseppi Huron Band of Potawatomi, stood along the former girl’s dormitory.

She tiptoed on her white moccasins, and peeped through a window, hoping to catch a glance of the interior.

She could have been kept there prior to the passage of the Indian Child Welfare Act in 1978 — it wasn’t until then Native American parents gained the legal right to deny their children’s placement in off-reservation schools.

Wethington said it was her second year coming to the memoriam.

“It’s a sad experience, but I am here to remember my family and all other families,” Wethington said.

Her great-great grandparents attended MIIBS, and other families also went to other boarding schools in the U.S.

The culturally significant clothing Harmony donned proudly was made by her grandmother, Jennifer Wethington, who said coming to the grounds is a visual reminder of what their family overcame from boarding schools.

MIIBS was just one of over 497 federally funded institutions identified that operated under U.S policies for more than 150 years where children as young as 4 were forced from their families, prohibited from speaking their languages and often abused.

Many children never returned home, and the Interior Department said that, with further investigation, the number of known student deaths could climb to the thousands or even tens of thousands.

“Each of those children is a missing family member, a person who was not able to live out their purpose on this Earth because they lost their lives as part of this terrible system,” said Interior Secretary Deb Haaland, whose paternal grandparents were sent to boarding school for several years.

As previously reported, the U.S. documented five deaths of Indigenous children at MIIBS from 1893 to 1934.

But after the land was returned to the Saginaw Chippewa Indian Tribe of Michigan in 2010 by the state, volunteer researchers from the Ziibiwing Cultural center found evidence of 227 deaths attributed to MIIBS that were not reported in the school’s archives.

She said that plans under an amended deed agreement between the city of Mount Pleasant and the tribe will begin ground-penetrating radar on the land, but no exact date was given

Federal government used money from Indian Trust Funds to pay schools — even those run by religious organizations, the report stated.

While it doesn’t say how many were church-run. An earlier report by the National Native American Boarding School Healing Coalition found that more than 150 were, about half each by Catholic and Protestant groups.

Further details state the government provided funding and other support to religious boarding schools for Native children in the 19th and early 20th centuries to an extent that normally would have been prohibited under rules of separation between church and state.

The Interior Department report, quoted a 1969 Senate investigation, acknowledged that “federal policy toward the Indian was based on the desire to dispossess him of his land. Education policy was a function of our land policy.”

Churches had clout with the government as well, it adds, and were able to recommend people for appointments to federal positions on Native affairs.

“We do this because they couldn’t,” said Lacey Kinnart, citizen of the Sault Ste. Marie Tribe of Chippewa Indians and descendant of boarding school survivors.

Her grandmother and great-aunts attended Holy Childhood as children, and other family members attended MIIBS.

Kinnart serves as the programs and operations coordinator for the Native American Boarding School Healing Coalition. It was her and her mother’s first year coming to the grounds.

“I’m humbled to be here among our community,” she said.

The day closed in front of the former boys dormitory, with traditional Anishinaabek jingle dress dancing, led by Punkin Shananaquet, citizen of the Match-e-be-nash-she-wish Band of Potawatomi Indians.

Shananaquet said the time was now to come together for the healing and protection of the future generations,

The Associated Press contributed to this report.