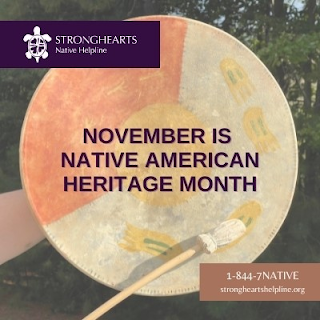 In November, National Native American Heritage Month raises awareness about our history, our present-day struggles and our hope for the future

Through colonization Native American cultures, languages, lands and lives were all systematically and forcibly taken. The histories of Native peoples should never be forgotten and that’s why it’s vital that we remember and share our histories not only in November but also all year.

Beginning in 1990, U.S. presidents have issued executive orders declaring November as National Native American Heritage Month. Proclamations have called for governments, groups, organizations and people across the country to observe the month with appropriate programs, ceremonies and activities.

National Native American Heritage Month provides Native peoples the opportunity to celebrate their diverse and rich cultures and traditions as well as educate non-Natives about their nations, raise awareness about the unique history of the United States and Native peoples, and acknowledge the strength and resiliency of Native survival. The special commemoration is a platform for American Indians and Alaska Natives to share their cultures through the performing and visual arts, history programs and food.

In 2021, there was a positive movement toward more inclusion of Native peoples in positions of influence on the federal level. A record number of six Native Americans were elected to Congress and began serving in 2021; and with the Biden administration came a renewed openness and willingness to include more Native voices in the national conversation. Most significantly, we celebrated the appointment of Deb Haaland  (Pueblo of Laguna) as the first Native American Secretary of the U.S. Department of Interior. Haaland swore in Bryan Newland (Bay Mills Indian Community) as Assistant Secretary on September 8, 2021. In October, President Biden announced the restoration of protection to Bears Ears National Monument in Utah. Bears Ears is sacred to many of the region’s Indigenous nations.

Throughout the year, Native peoples across Turtle Island have continued to protest fossil fuel extraction, mining activities, oil pipelines and other actions that cut through fragile territories and threaten Mother Earth and Indigenous lifeways. Public awareness was increased through heightened mainstream media coverage of important issues, including missing and murdered Indigenous relatives (MMIR) and the abuse of Indigenous students who were forced to attend Native boarding schools.

Generations of Native Americans have been persecuted by European settlers leading to historical trauma and high rates of domestic and sexual violence. Domestic violence isn’t a Native American tradition; it was introduced through colonization. Today, there is ample evidence that colonization still occurs through the inhumane conditions on reservations and the jurisdictional issues that prevent the prosecution of non-Native perpetrators on tribal lands.

“It’s important that we always remember to honor the resilience, love and strength of our ancestors who brought us to this point in time and to our elders and all of our relatives who continue to be courageous and committed to practicing our sacred traditions through song and prayer,” says StrongHearts Native Helpline Director Lori Jump (Sault Ste. Marie Tribe of Chippewa Indians).

Observing National Native American Heritage Month is an acknowledgment that Native peoples live on and are ever more resilient despite historical trauma and continued oppression. American Indians and Alaska Natives continue to create solutions and programs to address their unique issues. Through StrongHearts Native Helpline, Native Americans who have experienced domestic, dating and sexual violence can now get culturally-appropriate support. When our relatives are hurting, we are here to answer the call.

“National Native American Heritage Month gives us a chance to reflect on our peoples’ shared existence on this continent and to share our accomplishments as well as our continuing challenges — this includes the need to confront violence in our communities and raise awareness of the work that needs to be done to eradicate it,” says Jump. “With the collective strength of all our relatives we can work toward our vision of safety for our relatives and restoration of sacredness in communities free from violence.”