Open Records: Why It’s an Issue

Adult adoptees in all but four states and two commonwealths in the United States (Kansas, Alaska, Oregon, Alabama, Puerto Rico and the U.S.Virgin Islands) and in all Canadian provinces are forbidden unconditional access to their original birth certificates. Outmoded Depression-era laws create “amended” birth certificates that replace the names of the adoptee’s biological parents with those of the adoptive parents as well as frequently falsify other birth information. The adoptee’s original birth certificate and records of adoption are permanently sealed in closed records states by laws passed largely after World War II. These laws are a relic of the culture of shame that stigmatized infertility, out-of-wedlock birth and adoption. Even those adoptees now being raised in open adoptions, in which there is some contact between birth and adoptive families, are not allowed access to their original birth records when they reach adulthood. 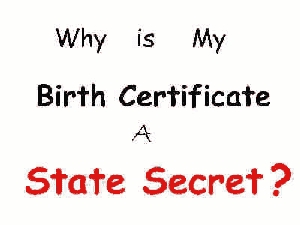 In Scotland adoptee records have been open since 1930 and in England since 1975. Sweden, The Netherlands, Germany, South Korea, Mexico, Argentina and Venezuela are only a few of the many nations that do not prevent adult adoptees from accessing their own birth records. The United States and Canada lag far behind the rest of what we used to call the “Free World” in opening closed birth and adoption records to those to whom they pertain. This is largely because well-funded and well-connected lobbies representing certain adoption agencies and lawyers have a vested interest in keeping adoptee records closed. These special interest groups want to continue to deprive adult adoptees of their rights, presumably to prevent the disclosure of controversial past practices such as baby-selling, coercion and fraud which are now hidden by state-sanctioned secrecy.
While many adoptees search for their biological relatives to discover the answers to questions regarding medical history and family heritage, all adoptees should be able to exercise their right to obtain the original government documents of their own birth and adoption whether they choose to search or not. At stake are the civil and human rights of millions of American and Canadian citizens. To continue to abrogate these rights is to perpetuate the stigmatization of illegitimacy and adoption, and the relegation of an entire class of citizens to second-class status.
bastard nation