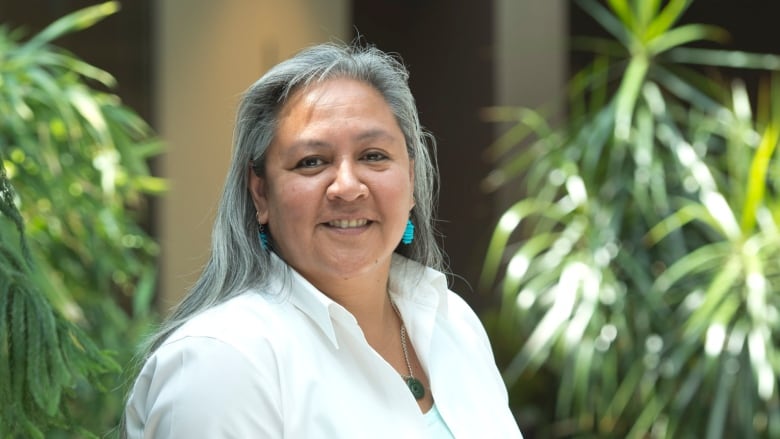 Raven Sinclair was taken from her mother at age four, along with her siblings. She hopes Friday's settlement helps fund ways to help people like her heal from their past trauma. (University of Regina)
143  shares
A Saskatchewan survivor says the federal government's settlement with Indigenous survivors of the Sixties Scoop — the details of which are expected Friday morning — has provoked mixed reactions within herself.
"A small bit of money for a lifetime of change and turmoil and in some instances pretty extreme trauma — I don't know if the compensation really matches," said Raven Sinclair, now a professor of social work at the University of Regina.
"But it's at least an overture that they're making."

Multiple sources speaking on the condition of anonymity told CBC News on Thursday the settlement will include some $800 million in compensation, or between $25,000 and $50,000 for each claimant. Roughly $100 million will be dedicated to other reconciliation initiatives.
Carolyn Bennett, federal minister responsible for Crown-Aboriginal Relations and Northern Affairs, announced on Monday in addition to the $750 million earmarked for individual compensation, $50 million would be set aside for a foundation to provide aid and supports for Sixties Scoop survivors.
Another $75 million will be provided to cover legal fees accumulated over the years for the plaintiffs.
Conditions of the legal fees compensation, which is capped at $75 million, include the agreement that lawyers will not go back to the survivors to try and get more money out of them.
During the time period known as the Sixties Scoop, thousands of First Nations children were forced out of their homes and placed in non-Indigenous care between 1965 and 1984, which resulted in psychological harm that has dogged survivors into adulthood, according to an Ontario Supreme Court ruling.


'Endless ways' to bring survivors together

Sinclair, a member of the George Gordon First Nation in southern Saskatchewan who was taken from her mother at age four, knows what she'd like the $10-million reconciliation portion to fund.
"I want to see adoptees have the opportunity to access healing programs, whether that's individual counselling, group counselling, healing retreats, culture camps," she said.
"There's endless ways that we can bring people together and help them to deal with past traumas and find more effective ways of living."


Placing a dollar amount on trauma


Nakuset, a Cree woman from La Ronge who was taken from her family at age three and adopted to a family in Montreal, told CBC Radio's The Morning Edition the ruling will mean different things to different people.
"What we learned from the residential school pay outs is that those that weren't able to sort of -- if they weren't able to receive the moneys, then the money disappeared quite quickly," she said. "It didn't really help."
Nakuset questions how a dollar amount can be placed on loss of culture, trauma and loss of familial connection.
Nakuset is the executive director of the Native Woman's Shelter of Montreal.
For Nakuset, she said if she went back to her community, she doesn't think she would survive.
"I'm so urban — I don't speak the language. I don't know how to live off the land. I don't know how to fish. I don't know how to hunt. I don't know how to do beadwork; I don't know how to do any of the things I'm supposed to know how to do."
If she knew how to do those things, then the teachings could be passed on to her children. Nakuset's children have Cree names and that's a start for now, she said.

She's still waiting for an apology, one promised by Premier Brad Wall.
"To me an apology is a recognition of wrongdoing, and also ideally an apology is made because it's not going to happen again."
Indigenous leaders have also called on Prime Minister Justin Trudeau to formally apologize for the wrongs of the Sixties Scoop.

Nakuset shared her story in the anthology STOLEN GENERATIONS. Use the seach bar on this blog.