‘Without our children, what are we?’ Maine cited for removing Native kids 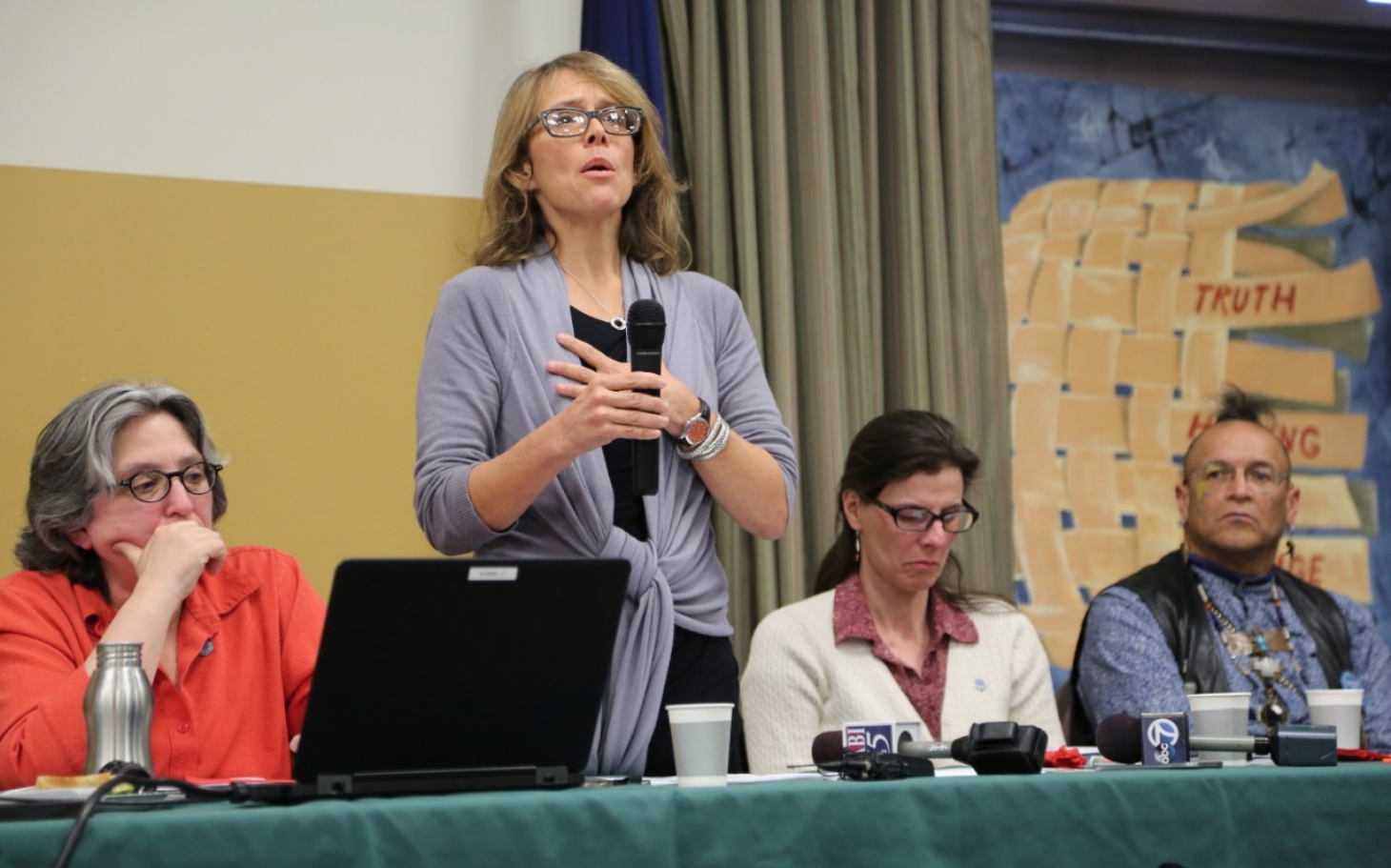 Truth and Reconciliation Commission says many Wabanaki children placed in foster care because of long-standing racism
May 1, 2015 | by Marcelle Hopkins | AlJazeera US

BANGOR, Maine — A commission has found that Native American children in Maine are five times as likely to be placed in foster care as non-Native children.

The Maine Wabanaki-State Child Welfare Truth and Reconciliation Commission (TRC) presented its preliminary findings and recommendations on Thursday at the first in a series of public forums in Maine.

TRC Executive Director Charlotte Bacon told a group of a few hundred Maine residents gathered at Husson University in Bangor that the higher rate of foster care for Wabanaki children stems, in part, from racism and cultural differences in childrearing.

“One of the things we found is that there are real differences for people who are working inside the state system and people who are Wabanaki around the idea of safety — what constitutes safety, what does it look like,” Bacon said.

The Maine Wabanaki TRC was established in 2013 to document the widespread removal of Native children from their homes and address the collective trauma experienced by tribal communities in Maine. With the participation of Maine’s four Wabanaki tribes and the state government, the commission aims to propose policy changes and initiate a healing process.

For more than a century, Native American children were taken from their families and communities in systematic forced assimilation. As many as 35 percent of Native children were placed in non-Native homes and boarding schools. Some suffered abuse and neglect, and many were left with lifelong psychological scars. Extended families were irreparably fractured.

The Indian Child Welfare Act of 1978 attempted to reverse the state-sanctioned practice by mandating tribal jurisdiction over Native child custody cases. But a federal review in 1999 found Maine to be severely noncompliant, with Native children continuing to be removed from their homes at a much higher rate than white children.

A committee was formed with representatives of the state government and the Wabanaki tribes. They found that new regulations and cultural awareness training were not enough.

“We weren’t talking about what happened in the past,” said Esther Attean, a Passamaquoddy woman and a co-director of community outreach organization Maine-Wabanaki Reconciliation Engagement Advocacy Change Healing (REACH). “We were trying to do reconciliation work without the truth.”
In 2008 the committee began discussing the idea of creating a truth commission modeled after those in South Africa and Latin America. Canada and Australia have established truth commissions to deal exclusively with the treatment of indigenous peoples; the Maine Wabanaki TRC is the first to do so in the United States.

“It is innovative in the U.S. to start this kind of process,” said Eduardo Gonzalez, the director of the truth and memory program of the International Center for Transitional Justice. “But in my view, this should be seen as the avant-garde, something that should happen more extensively in all of the country, because by no means is what happened in Maine unique.”

‘Kill the Indian … save the man’

Forced assimilation of Native American children in the U.S. dates back to the 1870s, when Army officer Richard Henry Pratt founded the Carlisle Indian Industrial School in Pennsylvania. The boarding school taught Native American children English, Christianity and European art and prohibited students from speaking their Native languages and practicing their cultural traditions.
Pratt famously wrote in an 1892 essay, “All the Indian there is in the race should be dead. Kill the Indian in him and save the man.”

His philosophy served as a model for boarding schools later founded by religious groups and the federal government’s Bureau of Indian Affairs. By 1973, an estimated 60,000 Native American children were enrolled in these schools.

Foster care and adoption programs also decimated Native American communities. In 1958, the U.S. Bureau of Indian Affairs and the Child Welfare League of America established the Indian Adoption Project, through which 395 Native American children were adopted by white families. By 1972 in Maine’s Aroostook County, 1 in 3 Native children were in foster care, according to Bacon.

The trauma of storytelling

At first, Wabanaki people were reluctant to participate in the TRC. Commissioner Carol Wishcamper said they distrusted a program that had the backing of the government and were not ready to open old wounds in the company of outsiders.

“The act of storytelling can be healing, but it also can be retraumatizing.” she said. “I don’t think anybody really anticipated the fact that there wouldn’t be trust of outsiders coming in. We thought that people were much readier than they were to meet the commission and tell their stories.”

Commissioners and statement gatherers had to rethink their approach to the tribal communities. After months of outreach, healing ceremonies and sharing circles, Wabanaki people began to tell their stories. The TRC has collected 159 statements from Wabanaki survivors, their family members, foster families and employees of the state child welfare system — social workers, judges, lawyers, guardians ad litem.

These statements, not yet publicly available, will be archived at Bowdoin College after the TRC’s closing ceremony in June. Then the work of implementing the commission’s recommendations begins. Much of that reconciliation work will be taken on by Maine-Wabanaki REACH.

“For us as white Mainers and for white people in this country, our job is to really look at what enabled that to happen and what’s alive in us today that enables that still to happen,” said Penthea Burns, a co-director of Maine-Wabanaki REACH.

The treatment of Wabanaki children must be considered, Burns said, within the context of an ongoing genocide against Native Americans. Attean agreed. She places the removal of Native children on a long list of injustices and indignities suffered by the Wabanaki peoples of Maine.