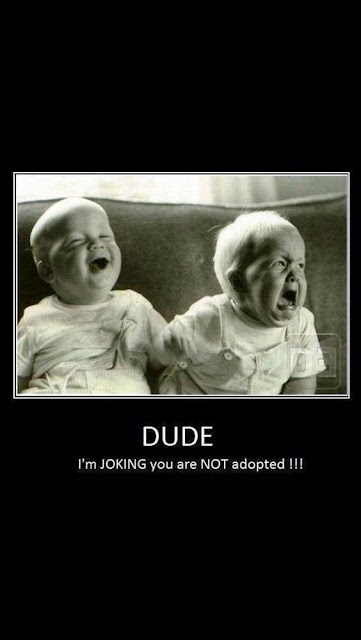 
The Comments on this thread express the attitude about adoption out there - I did not comment... Trace

P's brother is always joking w/ her that she is adopted! Too funny:-)

I have this with the laughing one with a Dallas Cowboys star...and the other a diff. team to funny..
You could put so many funny lines with this picture! Wish I was clever enough to come up with some! Love the picture though!

My sisters used to tell me this and I cry just like that baby! Lol

:( My son IS adopted and when he read this over my shoulder he asked, "What is wrong with being adopted." Personally not finding the slogan funny.

I used to say this to my sister all the time! We also used to tell her all my mom could afford to buy her for presents were the dogs toys based on ONE picture of her chewing on a dog toy corn cob (that was brand new) Now we are best friends. Funny how emotional torture brings you close! haha

I get you, D. My twins were adopted, too. Folks just don't get how hurtful this can be. Not whining, just saying...
hahaha! this is hilarious!
Not about adoption at all really. It's about the way siblings look for each other's hot spots. And yeah, that's pretty funny.

you would like this @E  haha
It is actually hurtful. I hgave my child up for adoption. It's equivilent to being mentally handicapped and being called retarded.

I completely agree with @R. Too true! I used to push my siblings buttons when we were growing up, and plenty vice versa. It's just part of growing up and I wouldn't change a thing. :)

I used to say to my brother he was found in a basket on the street jajajaja... I think it´s funny because they look like twins jijijijiji...


But it IS about adoption. It plays on the idea that adoption is second best, or unwanted. The child in the picture is crying because no one wants to be adopted. It really is offensive to adopted people or people who adopt. Just saying...

Do not like this. period.
OMG It's a JOKE....I guess some of you would be upset if you went to a comedy show...and listened to how they slash everything and everybody...DON'T make it more then it is...And this picture has been around forever with everything from football teams to this on it and everything in between....

No Kidding, A...is that the point? have you been through an adoption? Just saying.

I have 5 children of my own NOT ADOPTED....but have had several family members ADOPT including my siblings...and yes thats the point...it's a JOKE...nothing MORE nothing less...
hahahahahha!!!! i honestly don't think this is ANYTHING to do w/ adoption. My baby sister who is my most FAVORITE person in the world is adopted. But i remember when my little brother and i were younger we would say this to each other ALL the time!! and we totally made each other cry. hahaha love this pic! people. no one means any harm.

I'm with A., I called my co-worker special today, and I really meant he is special. But another co-worker said I was unenlightened. I wasn't saying he was special needs, I was saying he is a one of a kind. And when can we get mad at all the PC people for trying to make everyone feel bad all the time. Stop it.

For B, A and J, they had J convinced he was adopted.. crazy kids!!

SO CUTE!!
i have ths with B laughing and the A crying. too funny!

Love it! Makes me giggle.

My daughter is adopted, I don't dig it and truly I'm very thick skinned. Poor taste

I too look for the humor in most things, and I did say that I loved the picture as it has so many funny possibilities. I agree that it truly meant no harm. However, I'm leaning with Daisy and Heather here. Maybe a more appropriate caption. Still..., love your photos Hansol!

I guess I'm just asking folks to consider that, even when said with good intentions, words can hurt. Yes, this picture is adorable: it is the comment that can cut like a knife to someone struggling with their origins. Kindness is the best gift we can give one another.

i think this is funny, i would always tell my sister she was adopted. we still joke about it 15 years later and we're best friends now.

A few people here have posted that they have adopted friends, nieces, etc. and they still find it funny. I can't help but notice that no one who is adopted or has an adopted child finds it funny. I know that no one means to be mean, and it is just a different perspective for those who are not adopted themselves, but trust me, it is totally offensive to an adopted person.

So not funny... I am at a loss for words but this is what a century of adoption propaganda creates.... Trace