One night in Hinton, Alta., 16-year-old Shelley-Anne Bacsu decided to walk home along Highway 16 from her boyfriend's house.

She was never heard from again.

But 40 years later, her story is part of a new project aiming to honour the thousands of Indigenous women and girls who have been murdered or gone missing in Canada: a newspaper of “cover stories,” which organizers plan to hand deliver to Prime Minister Justin Trudeau.

On Monday, one day before the National Day of Action for Missing and Murdered Indigenous Women and Girls, those walking by the Ontario legislature at Queen's Park in Toronto came face to face with these women.

More than 100 “missing” posters set up in front of the building showcased those whose stories are rarely amplified.

In the middle of the posters is a newsstand carrying the “4,000 Cover Stories” newspaper compiled by the Native Women's Resource Centre of Toronto (NWRCT).

“It's really to demonstrate the impact of how many women have been missing that we know of,” Pamela Hart, NWRCT executive director, told CTVNews.ca. “So instead of a small section of a 40-page newspaper, you have a 2,000 (page), double-sided newspaper of cover stories of missing and murdered Indigenous women.”

She said that the massive size of the newspaper was to show “how large a newspaper would be if you covered all of these stories with the amount of attention that they deserve.”

Each one of these women's disappearances could be a cover story, she said.

The project is aiming to spur action to protect Indigenous women and girls in Canada. A national inquiry that ran between 2015 and 2019 called the issue a “genocide,” finding that governments and law enforcement have often failed to collect proper data or follow up on cases of missing Indigenous women.

More than 1,000 Indigenous women and girls were killed or went missing between 1980 and 2012, according to the RCMP, but experts believe the true number is closer to 4,000, according to the Native Women's Association of Canada (NWAC).

And this violence is ongoing — between 2015 and 2020, the most recent year for this data, Indigenous women accounted for 24 per cent of all female homicide victims in Canada, NWAC reports, despite making up just five per cent of the female population nationally.

Advocates say little has been done to tackle this crisis in the three years since the release of the national inquiry's final report, something that the NWRCT is hoping this project will challenge.

Each page and story within the newspaper will be accompanied by a QR code that, when scanned, will draft a letter to the MP of that specific missing or murdered woman's local riding, calling for action.

“My hope is that folks will learn and that they will follow through with the letter … so that we are slamming MPs and Trudeau with letters that force us to remember that this issue has never gone away,” Hart said.

Following the demonstration in Queen's Park, the newspaper will be part of activities on Tuesday, which is National Day of Action for Missing and Murdered Indigenous Women and Girls (MMIWG).

It will be present at the annual Sisters in Spirit Vigil at Allan Gardens in Toronto, where community members gather to honour those who are no longer with them and celebrate their lives, Hart explained.

Afterwards, organizers are planning to deliver the newspaper to Trudeau's doorstep in Ottawa. 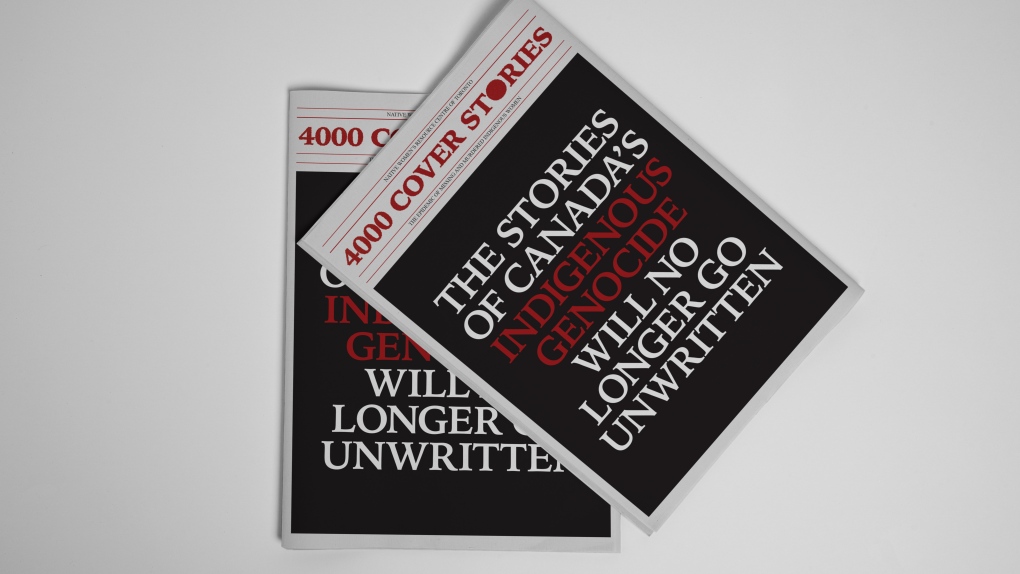 “So everybody knows that it's been done and that he has one of the largest levels of responsibility to respond,” Hart said.